I had to grab some things at the grocery store, and at first Moonie was helpful, helping to pick out cleaning supplies.

But then we turned the corner and he saw CAKES. I thought his little eyes were going to pop out of his head.

“Caaaaaakkkkkeeee….” he whispered reverently. I swear I heard angels singing (or maybe he was just humming to make it sound that way) as he climbed on the shelf and approached the baked goods, basking in their cakey glow.

Even better – he noticed they had MOONIE-SIZED cakes. Little cakes just for little dudes.

It was a revelation. I could see his perception of the entire world changing before his eyes. Moonie. Cake. Cake for Moonie.

He just HAD to have a Moonie cake for his very own.
With his name on it.
In pink to match his hair.

And I guess he’s a bit spoiled, because he got it. He couldn’t contain his awe at seeing a personal little cake that a nice bakery lady wrote “Moonie!” on just for him. 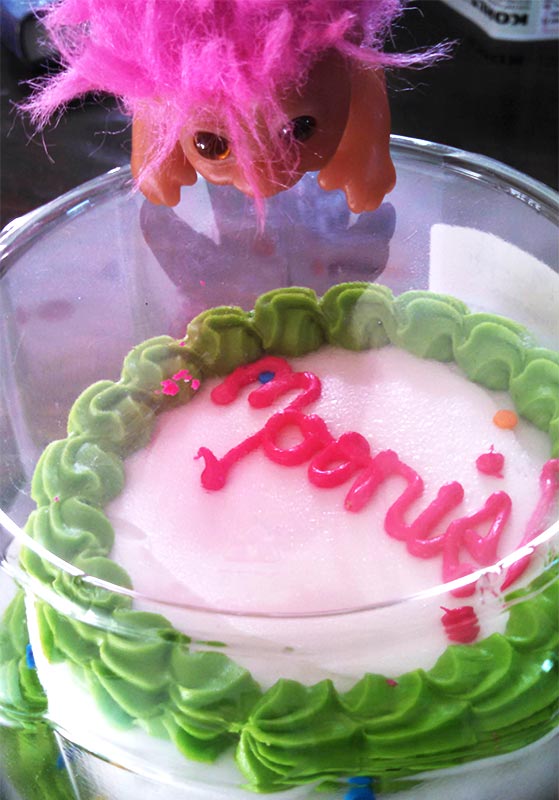 I told him he could have it after dinner, but he was ready NOW, with a fork and everything, and he was just too excited about his little Moonie cake not to let him have a piece. Who could say no to that little face?

It turned out he didn’t even need the fork. He just dug right in.

Now he’s running around smearing teeny frosting handprints onto everything in the apartment. Good thing we bought those cleaning supplies!

He might need another bubble bath in the sink, too.