At last, Moonie’s favorite day in the whole wide world was here. It was time for PRONK!

He’d been up all Sunday night making himself a PRONK headpiece, but he’d gotten carried away and forgot how little he was. He looked a little silly trying to balance it on his tiny head, so he made himself a PRONK sign to carry instead and ordered me to wear his headpiece. Yes, sir!

Off we went to Burnside Park for music and merriment!

Ooh, the PRONK sign. Moonie approached it with reverence. A beam of light shone down on him as he posed for a photo, approving of his pronkiness.

We checked out some music…

And some more music… 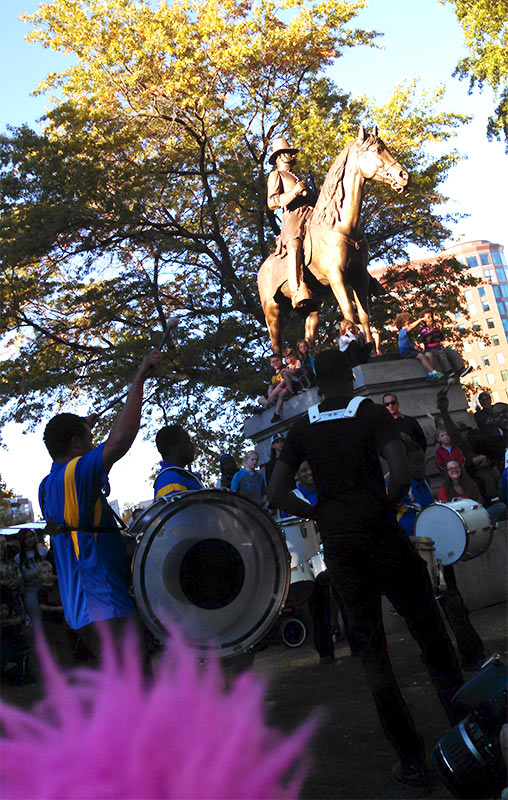 And this wonderful sign Moonie’s friend David had on his drums.

While I helped collect some trash, erasing all traces of PRONK so the festival can continue being invited back to the park, Moonie ran around checking out the PRONK letters. Gold, he announced, was his favorite color. Just like pink was, and silver was, and purple was, and red was, and…. 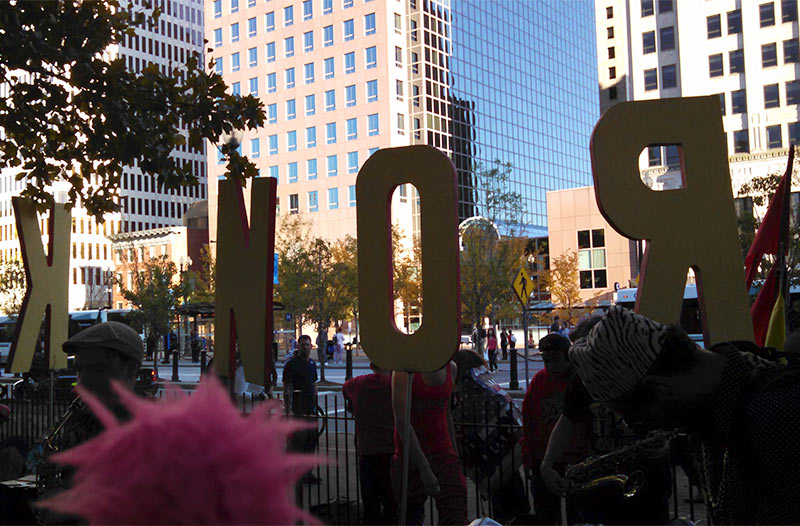 He also had to find the Extraordinary Rendition Band to show off his ERB t-shirt.

Ah, there was his red, white and shiny band! They were all ready to march in the parade.

When the parade kicked off, Moonie dragged me to the front, where our new friend Jeremiah and I were in charge of leading spectators to the College Street bridge. Whee! Moonie was so excited to be up front, with ERB providing a bouncing soundtrack to every step we took.

ERB dancer Matt was having fun leading a group of dancers during the march.

Moonie loved having the PRONK sign right behind him and kept hooting with joy every time he turned around and saw those big gold letters.

And Moonie’s new friend Preston did a great job carrying those signs. (Moonie and I tried to help, but they were heavy!)

During the march, Jeremiah and I were trying to clear South Water Street of spectators, so I kept holding my arms out to push the crowd back so they wouldn’t have their toes stepped on or get in the way of the bands and dancers that were coming up behind us. It’s a testament to the spirit of PRONK that the people I was trying to shove back kept grinning and running up to high-five me.

Or maybe it’s hard to be intimidating as a traffic director when a glitter-faced, pink-haired troll hanging around your neck is waving at everyone and calling out “Hi! Happy PRONK! Whee!” from his little pocket of your bag.

At any rate, we all made it to the end of the road at the Hot Club, where different bands immediately fanned out to play for the huge crowds of attendees. 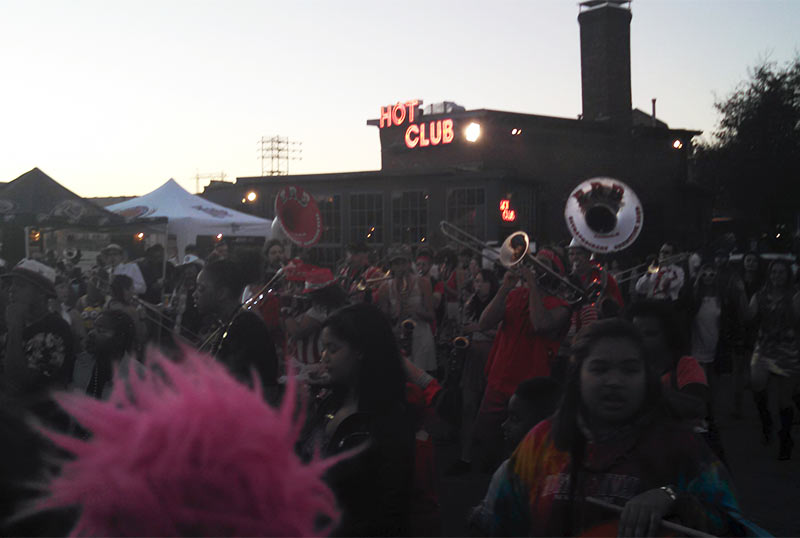 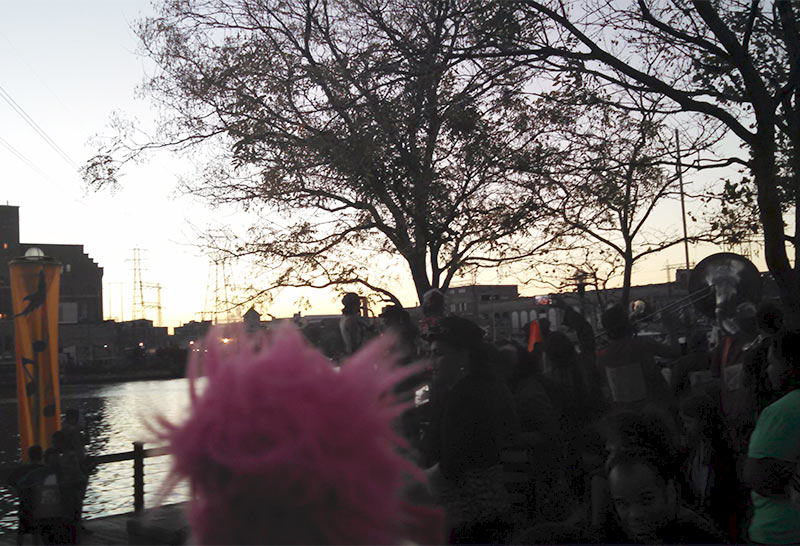 And here he is with his PRONK letters. 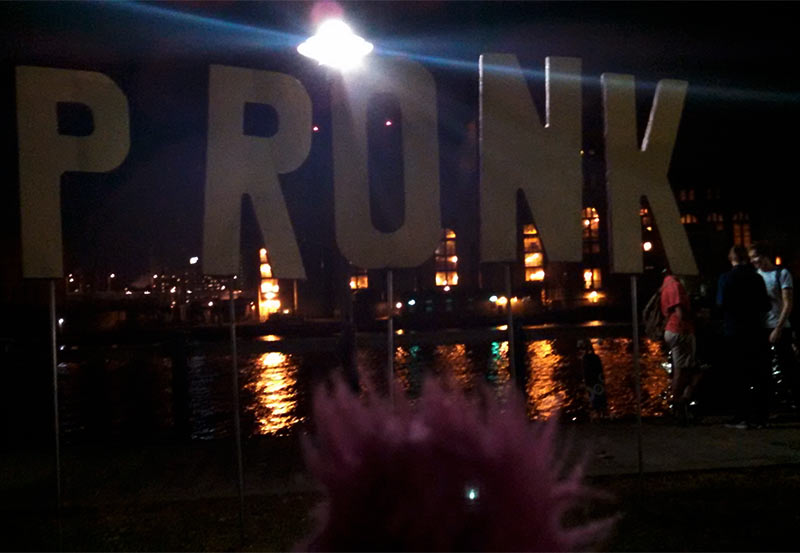 Here’s a tiny peek at Les Vilains Chicots, who came all the way from Paris to entertain us Rhode Islanders. It was too dark to film, but I hope this captures the spirit of so many shiny happy people. Music crosses all barriers, including language; no one minded not being able to understand the French lyrics.

They were so very fun and even made a conga line to limbo dance under a trombone in motion. Moonie was trying to shout his complements, but he doesn’t know much French, so Les Vilains were occasionally looking up wondering why they were hearing a tiny voice shouting, “Baguette! Gateaux! Camembert!” in encouragement. Silly Moonie.

And here’s – sniff! – the last photo I ever took of my nude little dude. He was enjoying Second Line Social Aid and Pleasure Society at the hurricane barrier, whooping it up, dancing in his little pocket and looking forward to his hometown bands Extraordinary Rendition Band and What Cheer? Brigade.

And then, just a set later, he was gone.

Wherever my nude little dude is at the moment, I’m sure he’s still having a blast. But I’m glad, before he disappeared, that he got to have such a wonderful time at PRONK. I could tell it was everything he hoped it would be.