Last October, Chris Daltry of The ‘Mericans was looking for help from creative friends for a project. When I showed up to aid Chris and his artist wife Jennifer I also met two new people, J.J. and Renee, who’ve since become important to Moonie. It’s always nice to meet people through music or art, and in this case it was a combination of both!

The ‘Mericans were creating a set of Marshall stacks to decorate the walls of The Parlour, an excellent Providence venue that attracts fantastic local and regional talent, for an upcoming show where The ‘Mericans planned to pose as Spinal Tap. It turned out to be one of the funnest and funniest nights I’ve ever had, and you can catch a lot of their Spinal Tap set on YouTube.

But even better, the Marshall stacks that the Daltrys and Renee and J.J. and I helped make served not only as a backdrop that night (mostly thanks to Jennifer’s realistic touches – she is a talented RISD grad!), but for more than 14 months and counting. I get a little thrill every time I see photos of rock, folk, rap, reggae, comedy, and all kinds of other acts that have performed in front of our Marshall stacks over the past year-plus. The Parlour is in no rush to take the stacks down, and during dozens, maybe scores, of shows since 2014 I’ve overheard all kinds of people saying how great they look there.

Fast forward a year to November, when Renee called me and J.J. back together to make a new set of Marshall stacks, this time for The Wilbury Theatre Group‘s production of “Passing Strange.” I looked down and pint-sized Moonie was holding his paintbrush, grinning and raring to go.

So off we went to Renee’s.

Renee had the cutest little Marshall amp to use for reference. It was nearly Moonie-sized! 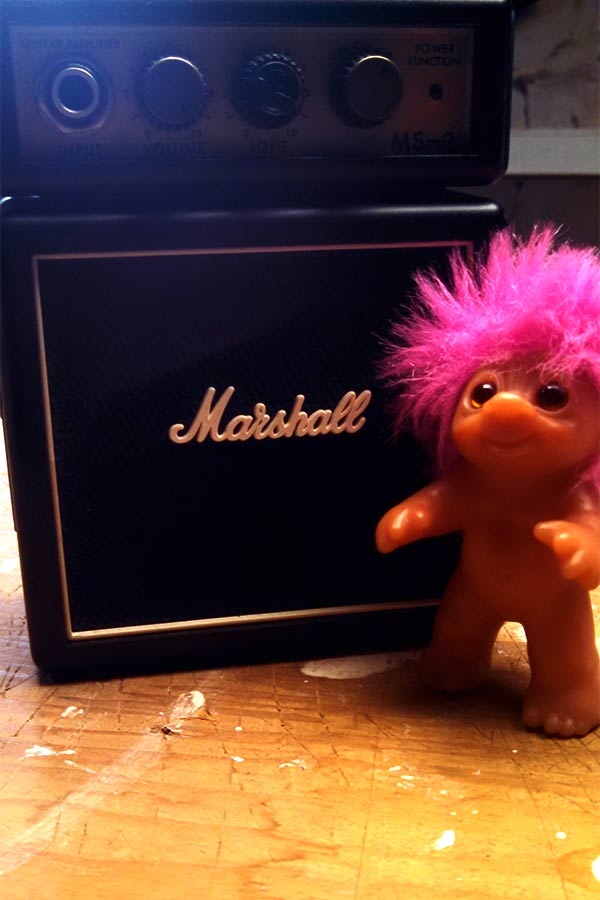 We took turns freehanding the Marshall logo for six amps in all. Moonie was pretty good at it. 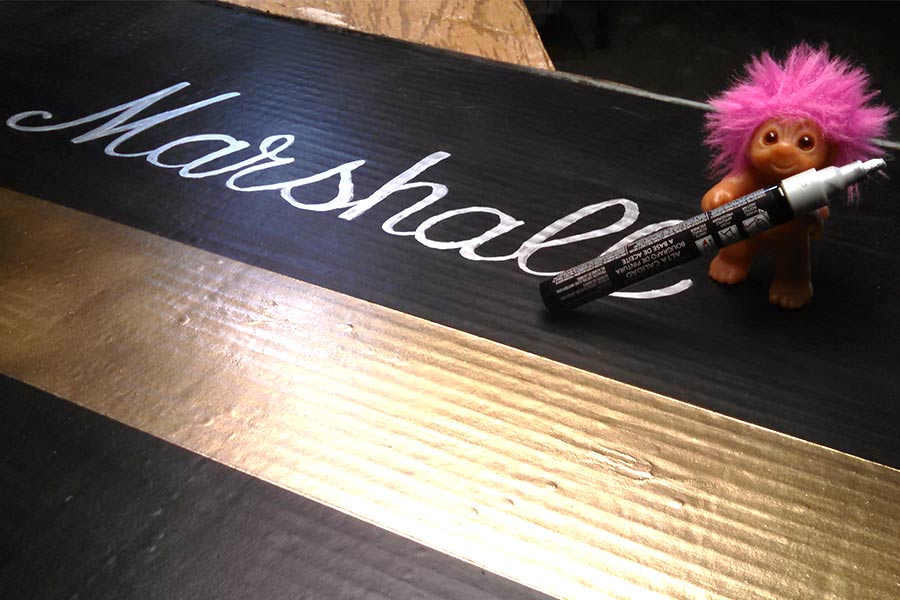 Here he is showing off his work. 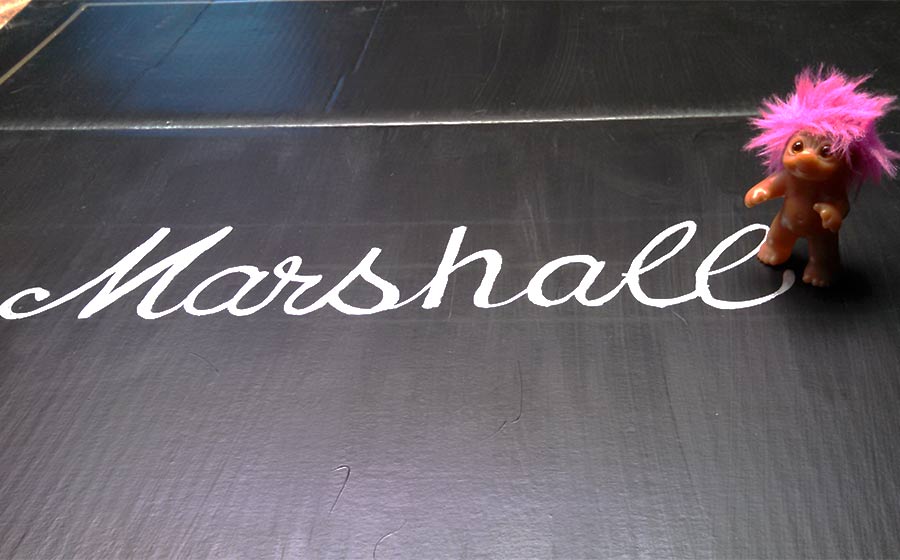 Even better, we got to attend “Passing Strange” at the Wilbury Theatre last month as thanks for helping with the Marshall stacks that Renee touched up with faux dials and delivered to the theatre. Directed by Brien Lang, “Passing Strange” told of a young black musician trying to discover himself by living in Europe and distancing himself from his middle-class suburban mother and home, meeting people along the way in Amsterdam and Berlin to help him explore the differences between art and reality. Moonie was exited to see Alec Thibodeau on guitar as part of the live band for the show; he’s long liked Alec’s art and acting and music with his brother Joel.

As everyone took their seats, Moonie’s excited little voice squeaked, “Hey! There are our stacks!” They looked good behind the drumkit.

Suddenly, out came the band, away went our cell phone, and silent went Moonie as his eyes grew large and he followed every second of the unfolding story. 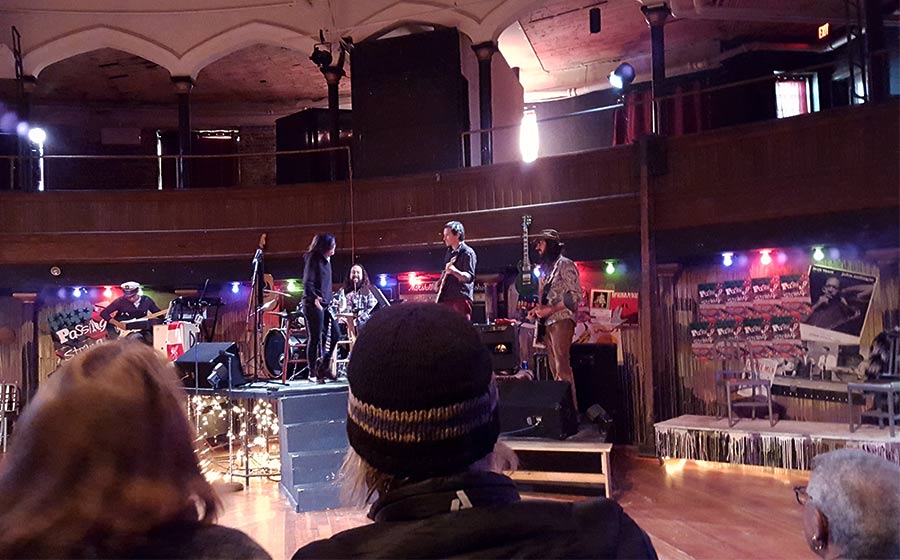 I think a little tear slipped down Moonie’s face a few times, like when the temporarily lost youth, played by Nigel Richards, groped for answers by asking the so-far omniscient narrator, played by Jason Quinn, how the song was supposed to go next, and the narrator tellingly had no response; or the youth’s crushing regret at not seeing his mom again before she passed away, as he’d been too ensnared in trying to portray himself as a “ghetto” artist to risk visiting home and encountering his true roots. The cast was so good, music so spot-on, and costumes so perfect, that I could tell my nude little dude was fully transported into time and place.

Moonie sniffled and smiled at the ending, and as the last notes rang from the band and the full ensemble departed in a wake of standing ovations, he hopped up on stage to check out his Marshall stacks up close.

He also couldn’t help but notice that every surface of the walls and counters were covered in long layers of splattered paint as an artsy backdrop to “Passing Strange.”

“Look! Look! That must have been so fun to make!” he cried, his eyes gleaming as he recalled helping with the Marshall stacks.

I think he wants Wilbury Theatre to know he’s available for set painting anytime. Now I just have to convince him that OUR walls and surfaces don’t need cool splatters and lines of paint all over them, too, as our landlord wouldn’t be as thrilled as Moonie with the new look.

Uh oh. He’s looking a little too excitedly over at his paint brush….