In the 22 months Moonie has lived with me, he’s gotten used to seeing live music three or four times a week. We’ve been slipping making it out to so many shows lately, and when I got home from work on Wednesday he gave me a stern “stay there” look, ducked into his little Moonie workshop, and then came out wearing his fanciest footwear:

“What’s up, little dude?” I asked.
“I’m wearing sneakers ’cause we’re going to Sneekers!”
“We are? What’s at Sneekers?”
“Emmm Deee Beee!” he shouted, running up and down the hallway in his comical kicks.

Moonie has been a big (for his size) fan of Marc Douglas Berardo – or MDB as I call him, or Emmm Deee Beee as Moonie even more enthusiastically calls him – since Moonie got to stay in his very first hotel room and dip in his very first pool when we saw MDB play Tupelo Music Hall in New Hampshire last spring. Since then, he’s seen MDB play everywhere from Waterfall Arts Center in Maine to the Providence Folk Festival to at least a half-dozen shows at MDB’s home base, Perks and Corks in Westerly. But to get to Sneekers, Moonie and I would have to cross state lines into Connecticut. It was rush hour and the show started in less than two hours.

“Let’s roll!” I said.
“Whee!” Moonie hooted, and then promptly tripped on his shoelaces.
“Um, buddy, I don’t think you actually need to wear sneakers to go to Sneekers,” I said, and Moonie happily kicked off the kicks, freeing his teeny toes.

“Look! Emmm Deee Beee!” Moonie shouted as soon as we’d arrived at Sneekers. He was admiring the little heart someone had drawn next to MDB’s name. Sneekers sure loved this guy!

MDB and his guitar hero pal Josh White were setting up under a giant moose head, so Moonie and I set up at the bar, where Moonie promptly ordered six beers and half the food on the “working women’s” menu. Mike the bartender was pretty cool about his itty-bitty customer, even if my nude little dude doesn’t pass for a lady. Moonie let me sample his yummy clam chowder and hand-rolled spring rolls as we waited for the tunes to begin. Soon, the guitarists were on the stage and my pink-haired pal was in heaven.

Moonie liked that the license plates behind Josh made a sentence: “I love you, rhythm.” Very fitting!

But he had to hoot at the license plates behind MDB. One said “GOP1” and one (hidden by his guitar neck) said “Tie me up.” Mixed messages or perfect pairing?

The license plates didn’t matter, though, because in moments – must have been those beers – Moonie was on the bar dancing. It was a really big bar, anchoring the whole room, and no one seemed to mind a naked little pink-haired music fan because they too were having fun. For three full hours, in between MDB’s original tunes, he and Josh covered the Allman Brothers, Little Feat, Jennifer Kimball, Glenn Frey, The Band, Bob Dylan, The Beatles, Neil Young, and Don Henley, offering unusual but spectacular renditions of each. Moonie can tell that MDB is a true music fan; he doesn’t play cover songs for their popularity with audiences so much as out of admiration for and inspiration by each. He had something nice to say about every tune or its creator.

When a young lady requested “Freebird,” MDB joked that no one had the time it would take them to play the whole song. But then he and Josh exchanged a look – 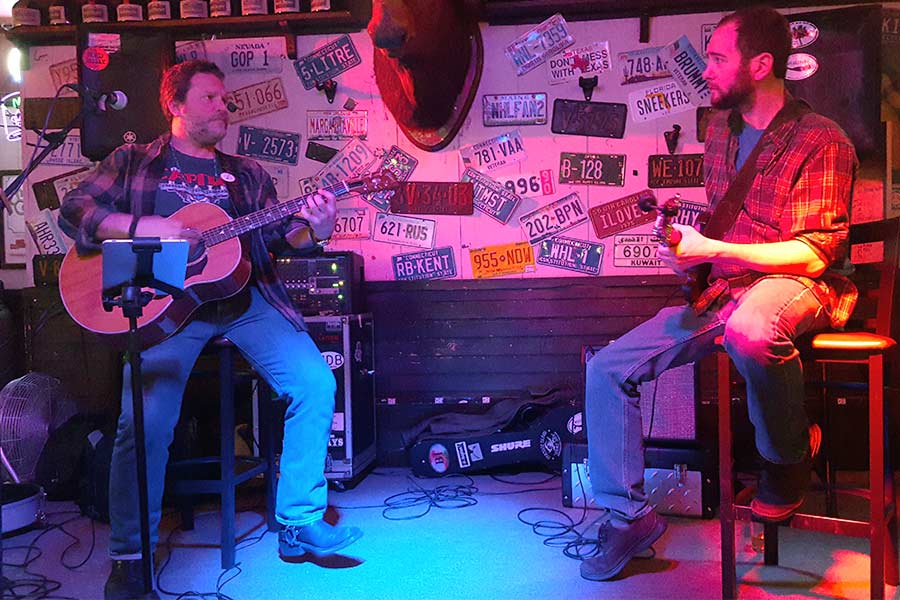 – and suddenly they were trying not to dissolve in laughter as they decided to play the song anyway.

And it sounded great.

I did lose sight of Moonie at one point, but I spotted him up on a shelf, making friends with some Sneekers penguins. 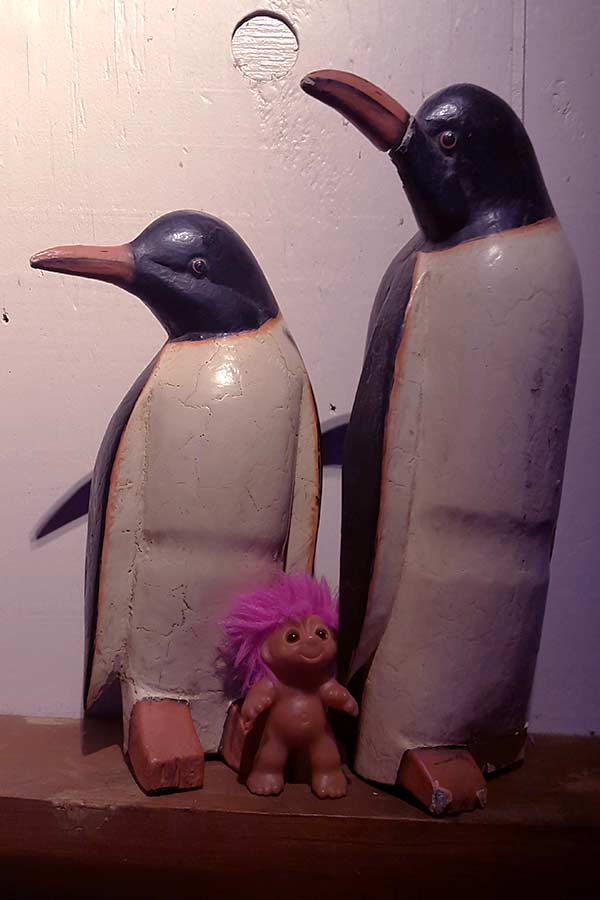 He hopped down, though, to wiggle his bottom to a few more MDB tunes before we had to head back home.

It was totally worth the weekday drive.