On thing about Moonie: the little guy loves holidays.

And I mean LOVES.

So the closer July 4th crept – or should I say “Ind-whee-pendence Day,” as Moonie loves to add a “whee!” into all fun things – the more time Moonie spent in his little Moonie workshop. I always know he’s up to something when I hear the sounds of hammering and sawing and nailing (even if I have yet to see him produce anything made of wood or nails) through the door.

On July 4th, after a particularly loud morning of workshop preparations, a very triumphant and patriotic Moonie emerged from his workshop.

“That’s it?” I blurted out. “That took three weeks to prepare?”

He winked and ducked back in his workshop, coming out a moment later in full splendor. 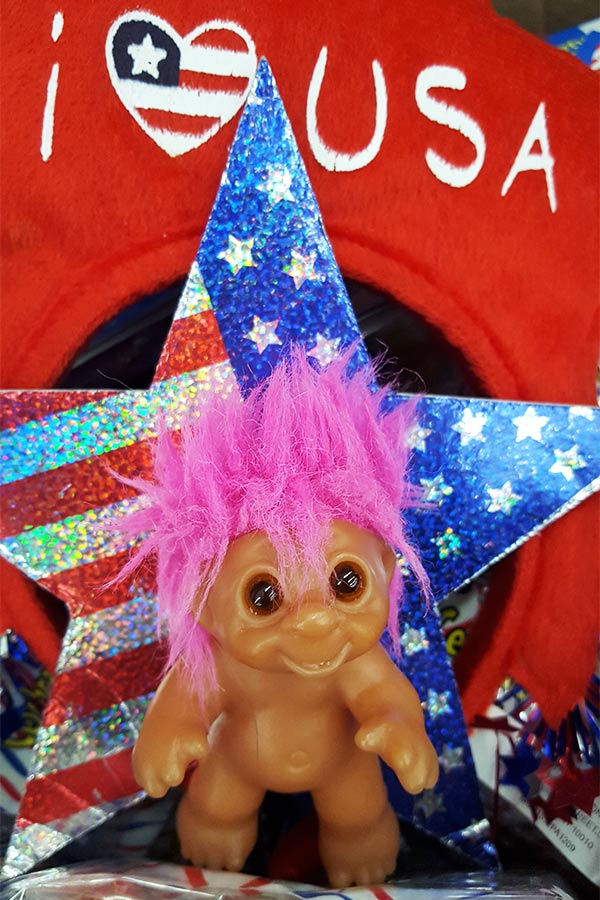 He’d also baked dozens of cupcakes and amassed a pile of sparklers. 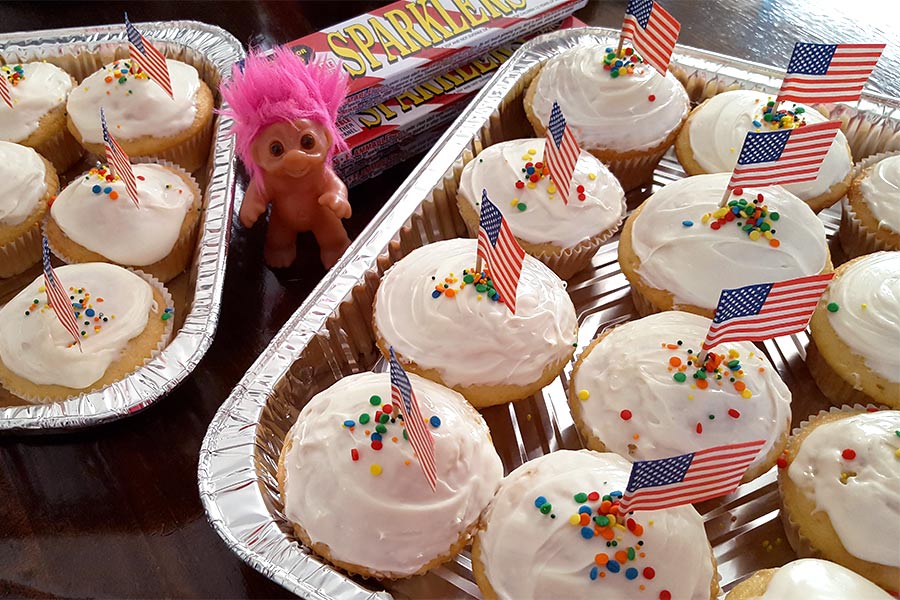 We spent July 4th at our friends J.J. and Don’s party, where Moonie hunted and caught some wild lavender.

And Moonie’s friend Elaine brought him the most perfect dessert: a Hoodsie cup! He has so much trouble choosing between chocolate and vanilla ice cream (he loves them both and doesn’t want the one he doesn’t choose to feel bad). This way he got to eat BOTH. Good going, Elaine.

He even added a Moonie-sized flag to make his treat extra “July Fourth-y.”

At 9:15, we all trooped down to India Point Park to watch the big fireworks at 9:15. First, though, we watched a bunch of drivers double- and triple-park along Route 195, treating it as a parking lot and backing up the whole highway, to watch as well. (“Those guys are kind of jerks,” my normally gentle Moonie grumbled, and the rest of us agreed.)

But Moonie forgot all about the grumblies as soon as the fireworks began. My tiny troll’s “ooh”s and “ahhh”s were louder than anyone else’s as his amber eyes grew big and round as saucers with each pretty sight and impressive bang or pop.

All in all, I’d say my guy had a pretty perfect evening. When we got home that night, though, I thought my sleepy pal would head to bed, but instead he beelined into his Moonie workshop, where the sounds of hammering and sawing and nailing began again.

“Moonie?” I asked through the door after knocking. “It’s after midnight. July 4th is over, buddy. No more holidays this summer. You get to take a little rest now.”

“Can’t,” I heard him mutter. “Bastille Day is only ten days away.” And the sounds continued.

Boy, does that dude love holidays.