Once again, Moonie had cause to join a women’s rally in Providence on January 20th. He said he’s disappointed that the leader of the country he lives in doesn’t respect women, or pretty much anyone who isn’t a rich, white, straight male. So Moonie, who DOES respect women, decided to make his little voice heard on behalf of his other colorful-haired troll friends.

He made some posters: first of his front… 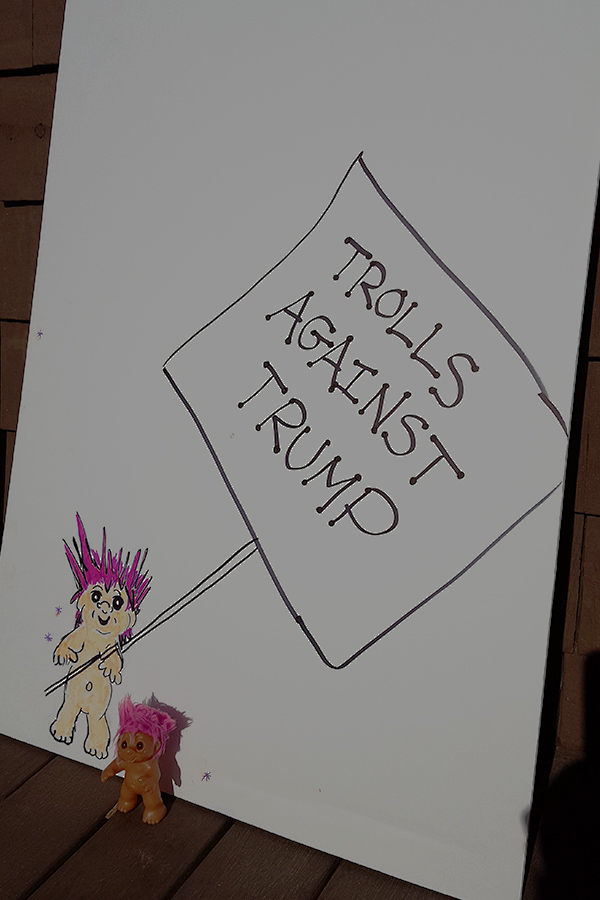 and then of his back (because we all know he’s very, very proud of his backside, which he inspected closely to be sure he’d captured its voluptuousness). 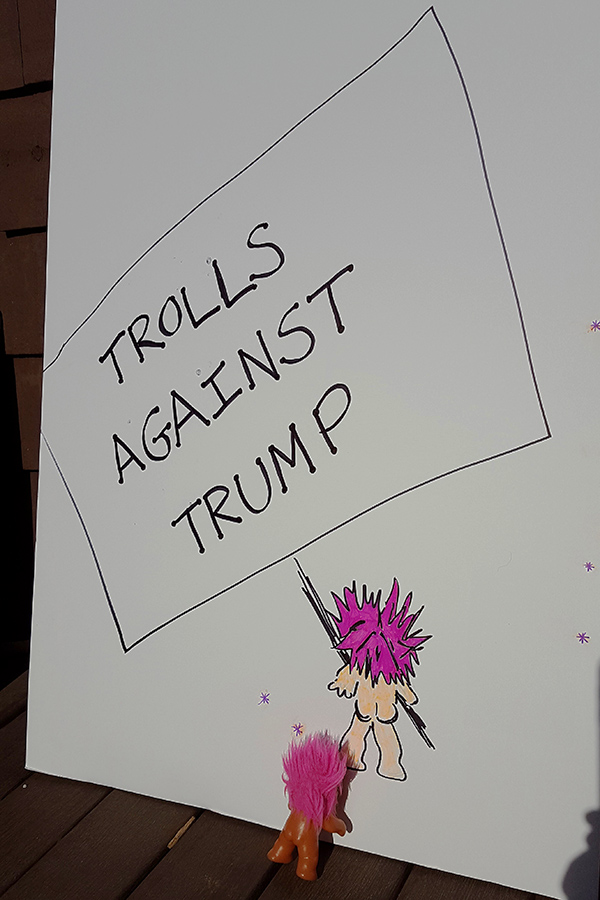 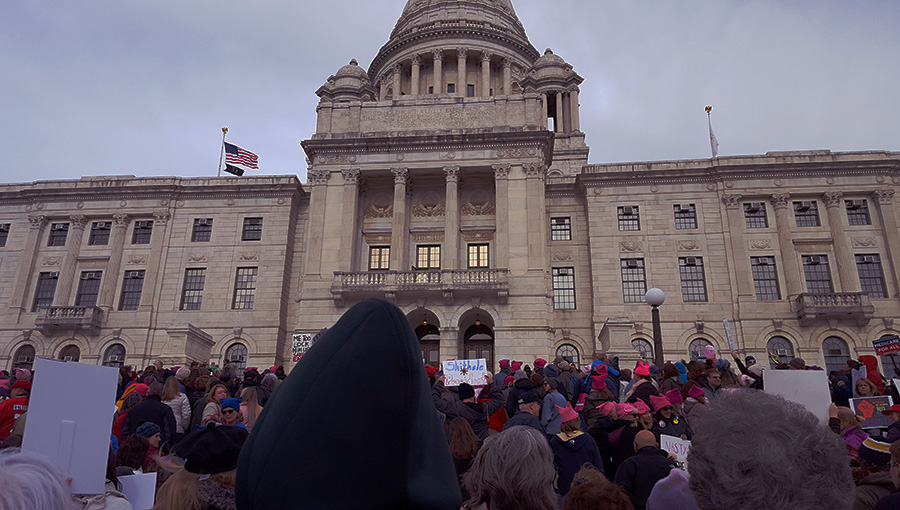 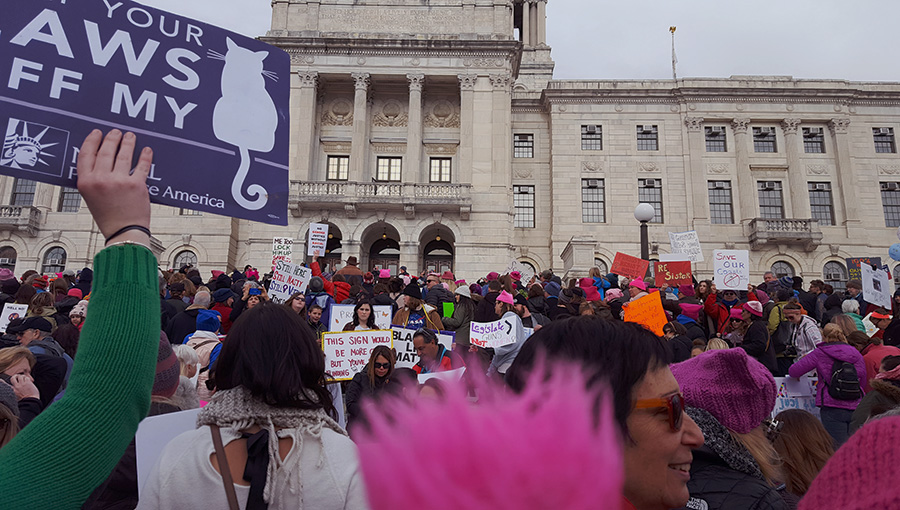 His friend Diana made a sign that said, “perSISTER” on one side and “reSISTER” on the other, which earned her a high-five from little Moonie, 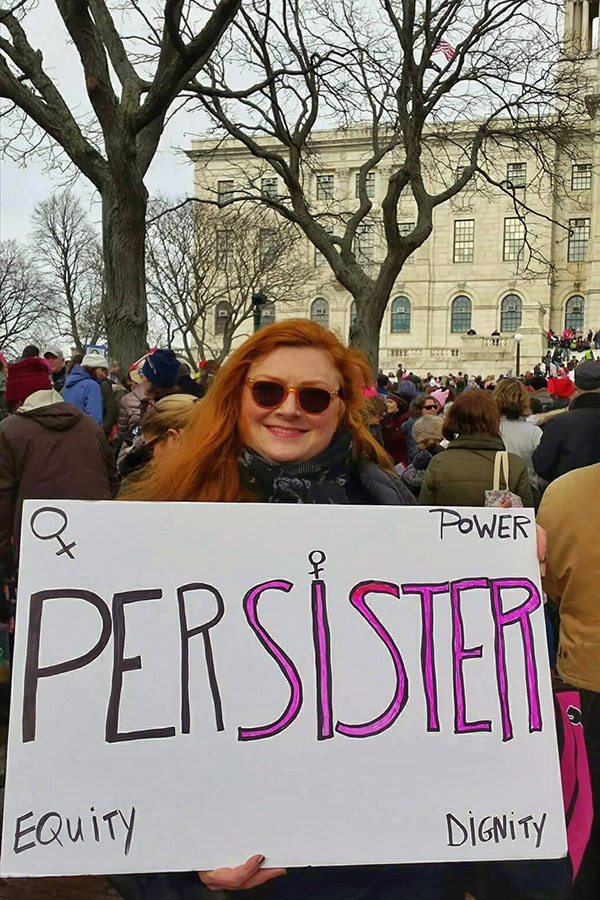 and his friend J.J. had a terrific sign for her dog Alfie, which earned her a big bout of giggles from Moonie. 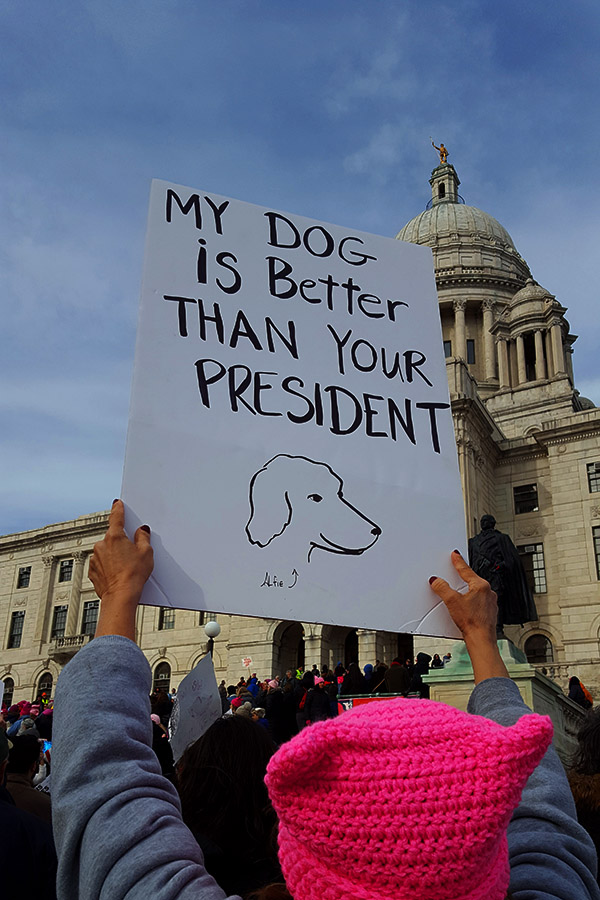 Moonie was most excited to see his friends in the Extraordinary Rendition Band, who opened and closed the rally with red, white and shiny outfits and upbeat songs. Little Moonie continues to be a BIG fan of ERB! Look how excited he looks to hang out with his friend Greg, who plays washboard for the band. 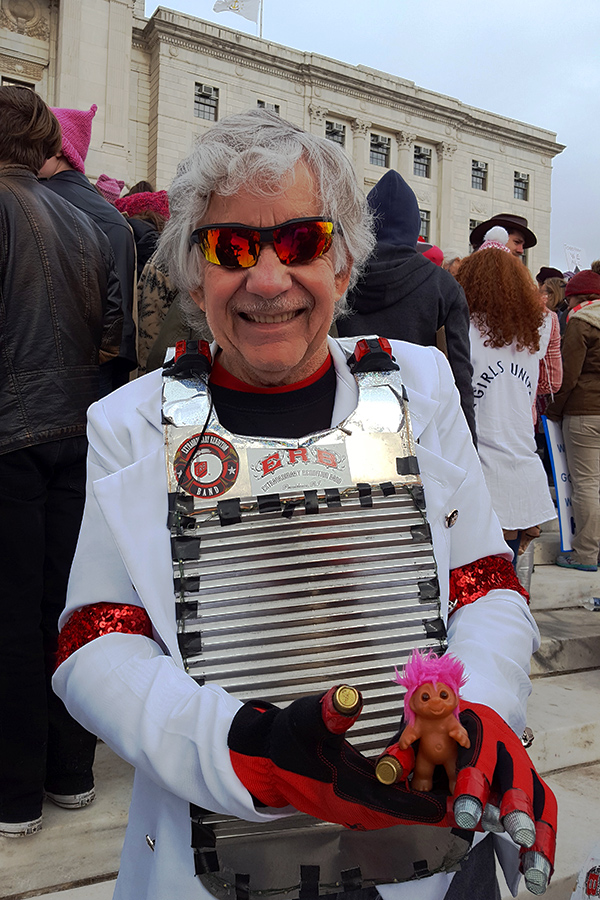 ERB member Jessica Brown was a spectacular emcee throughout the rally and gave a really thought-provoking talk near the end about both inherent racism and inclusiveness, with great points on how we all have a responsibility to be aware of our thoughts, actions, privilege, and prejudices. Moonie nodded along with every word, enraptured with truth.

And then (if you look very, very closely you might see his little pink head running around between people’s feet) he got down and danced to ERB’s music with the Brick by Brick activists before joining their rally-ending parade that marched down and across the street to a park.

It’s not good news that we have cause to be even more worried about our country than we were on this date last year. There is more to fear for Moonie’s friends who aren’t straight and who aren’t white and who aren’t cis and who weren’t born here, and there’s a lot to worry about concerning threats to our natural and cultural environments. We’re marching a bit more towards a police state each month, and I’m sad to report that little Moonie, who used to have a smile permanently plastered to his little face, has been frowning with worry, concerned that the country he loves and the people in it aren’t being treated with the respect he thinks they deserve and cringing every time the press or any agency or organization is suppressed when trying to reveal or share truth that differs from what the president wants people to hear or think or believe. Little Moonie never envisioned this after decades of living in the land of the free, and I hadn’t, either.

So as long as it takes, Moonie will stand every bit of his three inches and speak up for those who can’t. And he is glad that he has friends like ERB who commit their time and energy to speaking up for others and spreading positive vibes. We have to look out for each other, Moonie is telling me. Let’s spread the love for every person of every color, gender, size, age, and religion. He’s starting out by giving me a big hug…And he has one for you, too.

Last Saturday I woke to find Moonie all ready for the women’s march here in Providence. 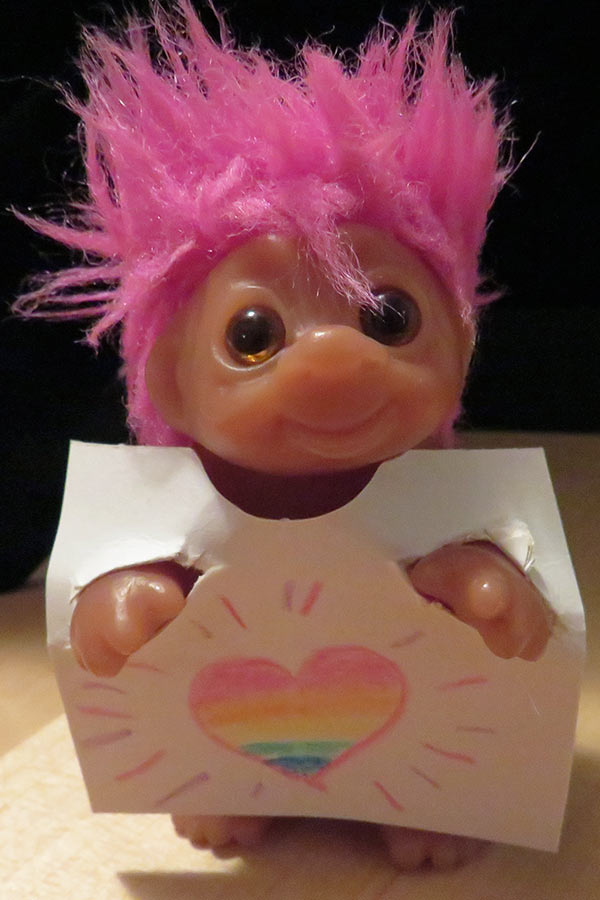 The march through the streets of Providence was too scary for me to snap any pics. It’s awfully easy to lose an excitable little troll pal in a big crowd, so despite all the energy and camaraderie I was fixated on keeping an eye on his pink spiky head (which people kept complimenting, thinking he was wearing the world’s tiniest “pussy hat”). END_OF_DOCUMENT_TOKEN_TO_BE_REPLACED

The Providence Community Library serves nine different neighborhoods across Providence. It formed in 2009 when the Providence Public Library lacked the resources to keep all of its facilities in operation; a dedicated group of people worked hard to seek support to keep these branches open under a different name and leadership, and it paid off. Nearly seven years later, the nine branches of the PCL serve hundreds of thousands of people, making a difference every day. But they are facing a $100,000 shortfall in the next three months and are seeking $250,000 from the City of Providence to operate.

Here’s where Moonie comes in. 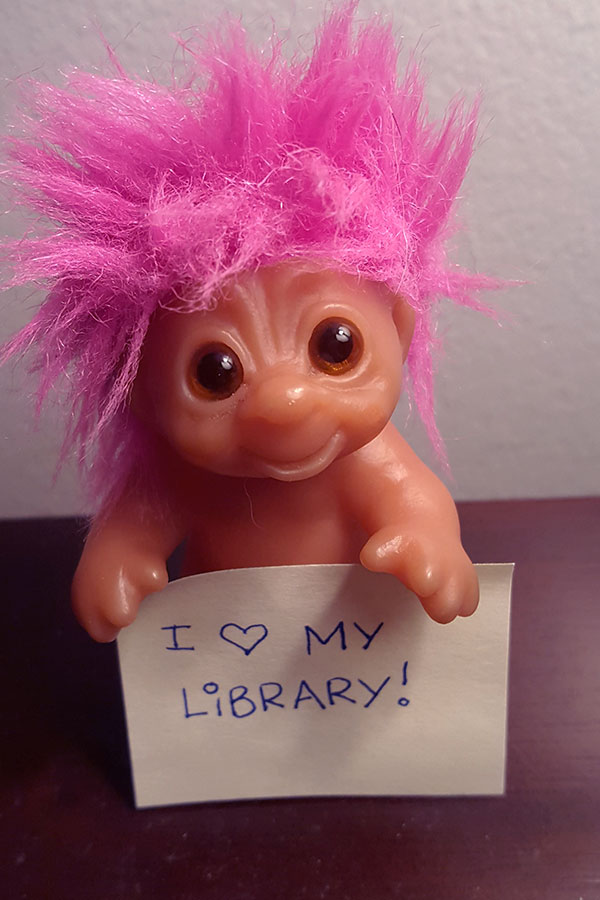 Moonie, you see, is a big fan of libraries. He loves all those rows of books and magazines and DVDs and computers, and he loves even more how kids and adults of all ages can access those resources to learn and laugh and grow. So Moonie led the way today where he planned on being front and center at PCL’s rally at City Hall to ask Mayor Elorza for funding for our important libraries. 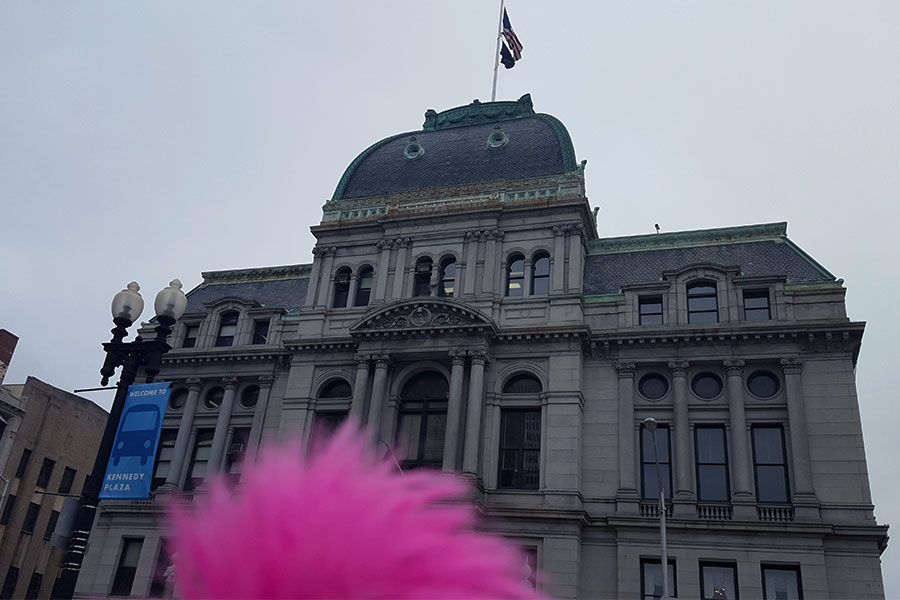 END_OF_DOCUMENT_TOKEN_TO_BE_REPLACED

For the third year in a row, people who believe that food containing GMOs (genetically modified organisms) should be labeled gathered together to raise awareness and support. GMOs can harm beneficial insects (as a former beekeeper, this is particularly important to me) and increase risk of illnesses such as cancer and birth defects (as a human being, this is even more important to me). We should know when we’re eating plants or animals that have been injected with genetically modified and engineered ingredients. But we don’t. 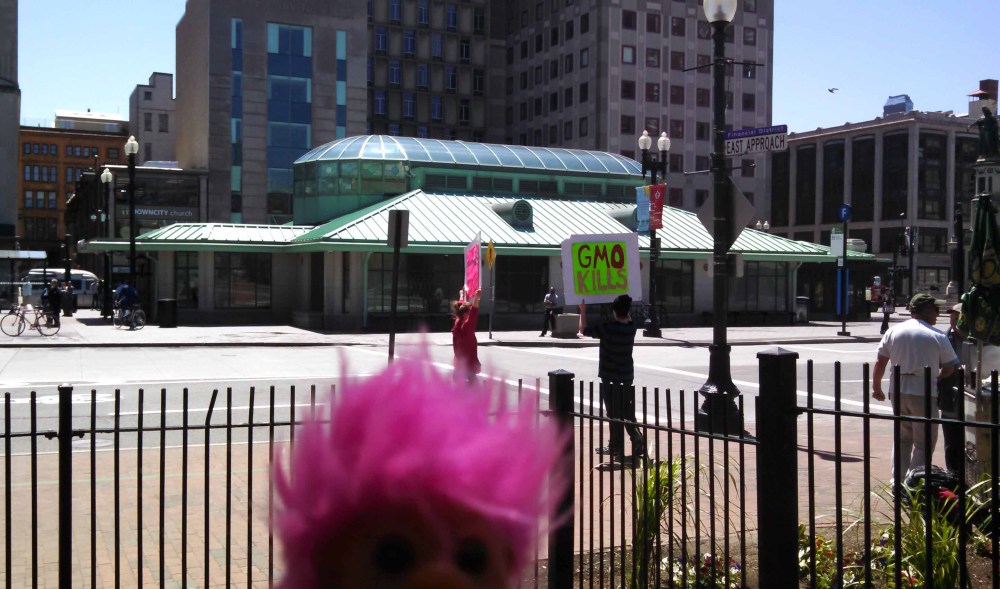 Monsanto is a big company with deep pockets that lobbies to protect their various GMO foods from being labeled, both fearing and knowing that informed Americans would make better choices than their modified crops and their growth hormone-tainted animal products. They also keep winning. Despite scientific evidence of GMOs’ harm, money and power talk. The recent Monsanto Protection Act passed by Congress and President Obama bans courts from halting the sale of Monsanto’s genetically altered seeds. If we can’t stop bad things from invading the products sold to us as food, we should at least know the bad things that are in them. That’s where even we little folk have power. 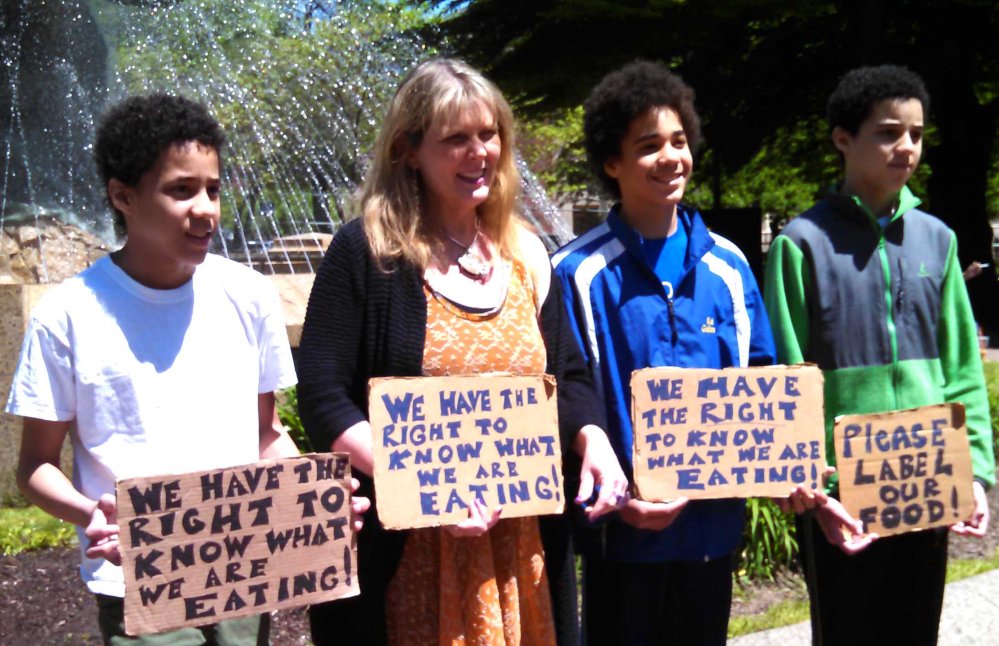