Moonie’s musician pals Marc Douglas Berardo and John Juxo were playing a show in Maine, and Moonie insisted we drive up. So we did. Even if I had to look at his excited little bum on the dashboard the whole way.

We did stop at a rest area so Moonie could tell bear jokes to his pal Smokey Bear. 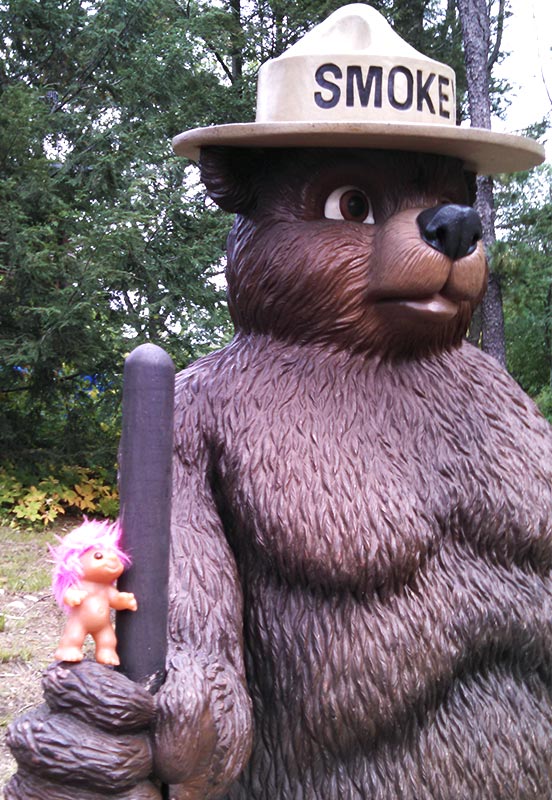 Moonie: “Why don’t bears like fast food?”
Smokey: “Why?”
Moonie: “Because they can’t catch it!”

Moonie: “Why did Smokey get fired from his fire ranger job?”
Smokey: “Er, why?”
Moonie: “Cause he only did the BEAR minimum!”
Smokey: “Uh, kid, can you move along? I have some, uh, important fire prevention to do here.”)

But we did make it to the Waterfall Arts Center, which turned out to be totally awesome. 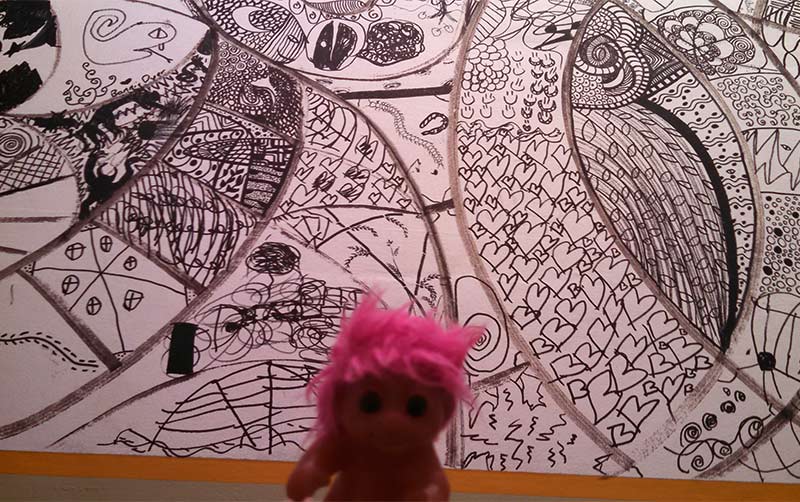 Although it was dark, we immediately spotted a living wall growing against the brick, sporting moss plus the bumps and ridges of other plant life. The building had clearly been a school at some point but was now full of art every place you looked, both inside and out. 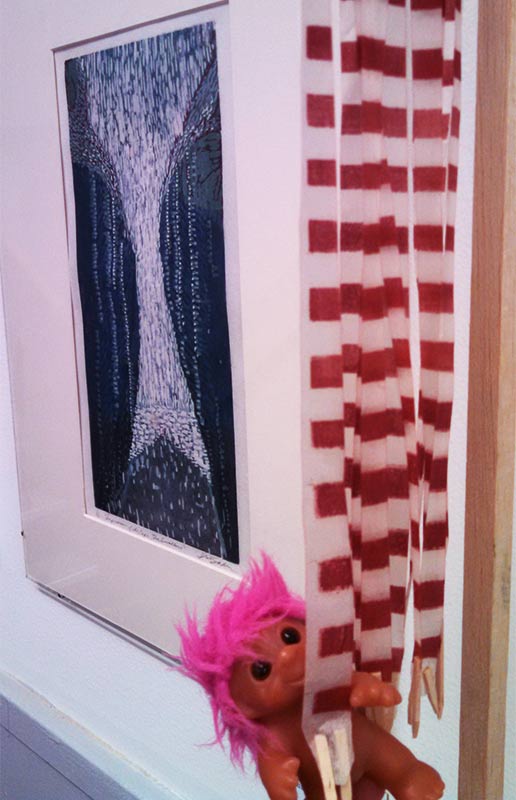 And places you wouldn’t expect.

We thought the restroom carried an excellent sentiment. The world can always use more art.

A nice lady named Lorna let us into the main gallery, which is currently featuring a neat exhibit by Susan Smith that comments on the “superweeds” we humans have ironically created while trying to eradicate what we consider weeds. Then Moonie discovered what he thought was a candy machine – his favorite kind of machine – but what turned out to vend not food for Moonies but food for plants. It was full of little plastic capsules that each sported a pat of soil containing seeds. We both wished we had quarters for a “seed bomb.”

But as fun as it was to look at the sketches and sculptures and murals and paintings all over the place, Moonie couldn’t wait to see his friends MDB (or “Emmm Deee Beee, as Moonie excitedly hoots during shows) and Jux make merry music. He rushed to the stage and checked out Jux’s keyboard, which featured some cool shades.

Finally, after a bit of a delay for more people on “Maine time” to fill the seats, “Emm Dee Bee” and Juxo started to play, and Moonie was in heaven from the very first chord.

Marc Douglas Berardo is a favorite, a living compilation of Ellis Paul and Richard Shindell. And I don’t mean in any way that he’s derivative of their music, because MDB writes all his own stuff and has all his own sound, never playing anything the same way twice. I mean that everything I’ve loved best about those two songwriters for so many years – Ellis’ great sense of humor and his pleasant, slightly smoky voice; Richard’s captivating storytelling like a warm blanket that gives voice in a beautiful way to characters both fact and fiction who otherwise might not have been recognized – are some of MDB’s best qualities as well. So Moonie wasn’t the only one enjoying the show once MDB started playing. The whole audience was spellbound by the songs and amused by the funny banter. 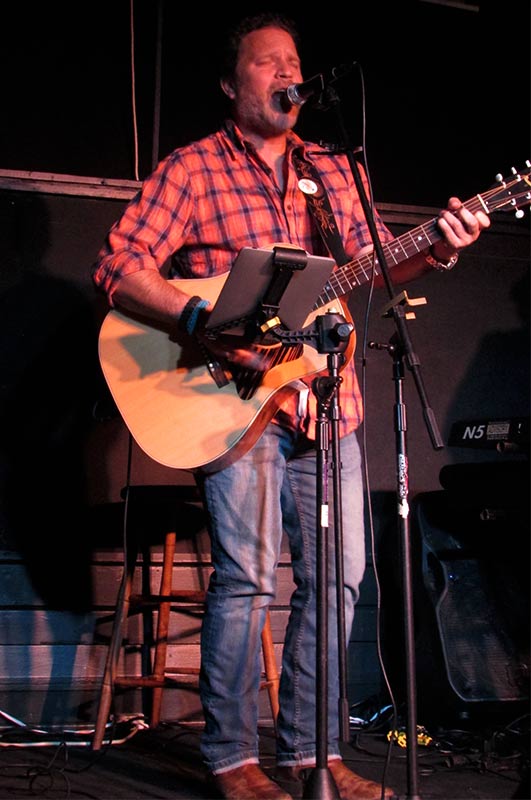 John Juxo is one of Moonie and Me’s favorites as well; he too has a great sense of humor, and he’s flat-out amazing on both keyboard and accordion, playing in a dizzying amount of bands all around Rhode Island, Massachusetts, and sometimes random places like New Orleans. Throughout the evening Jux played a number of roles MDB jokingly assigned him, such as a student pursuing piano lessons (which had the audience roaring, because Jux’s casual one-handed tickling on those ivories while alternately holding his accordion coaxed out masterful melodies that revealed decades of experience), or that poor Jux had been blind since birth (because he was sporting shades), or that he didn’t speak a word of English. MDB and Jux played well off each other with both music and camaraderie. 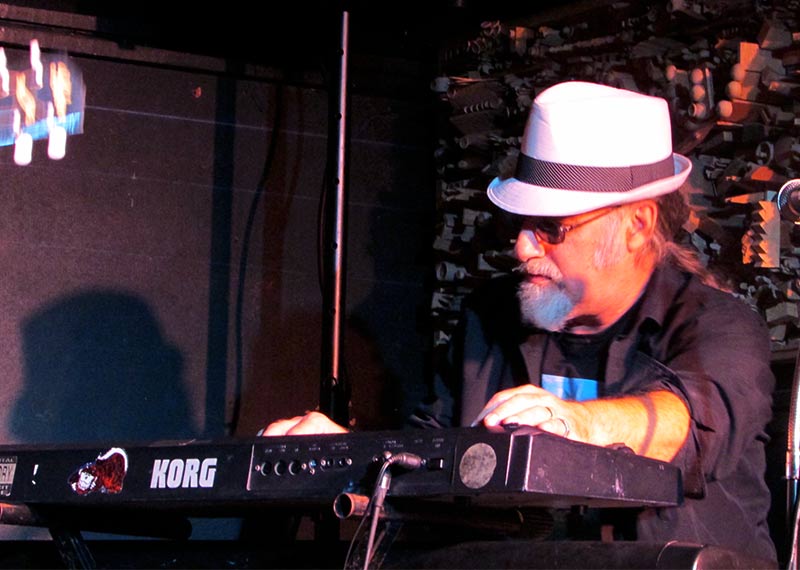 MDB had a cool shadow accompanying him.

And an even cooler accordion player. 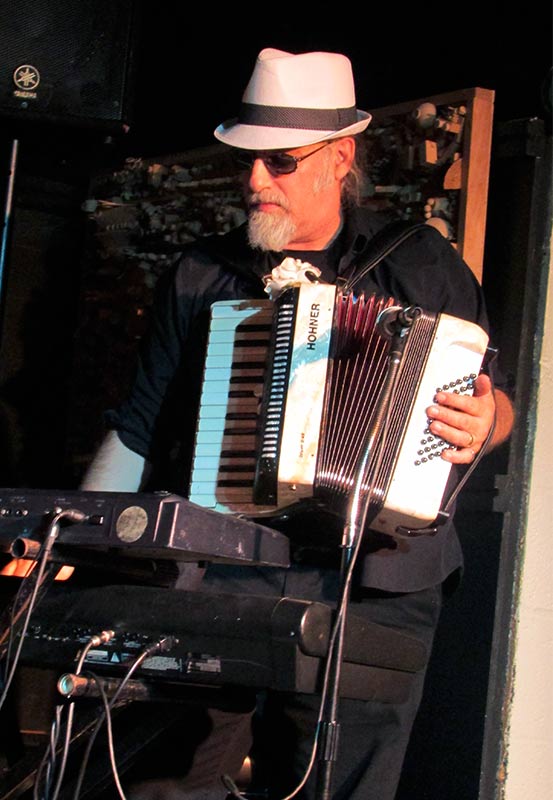 I don’t think anyone wanted the show to end. MDB alternately confided in and teased the audience members, and we in turn were captivated by songs transporting us across time and geography. Moonie’s little amber eyes shone big and round in the dark. 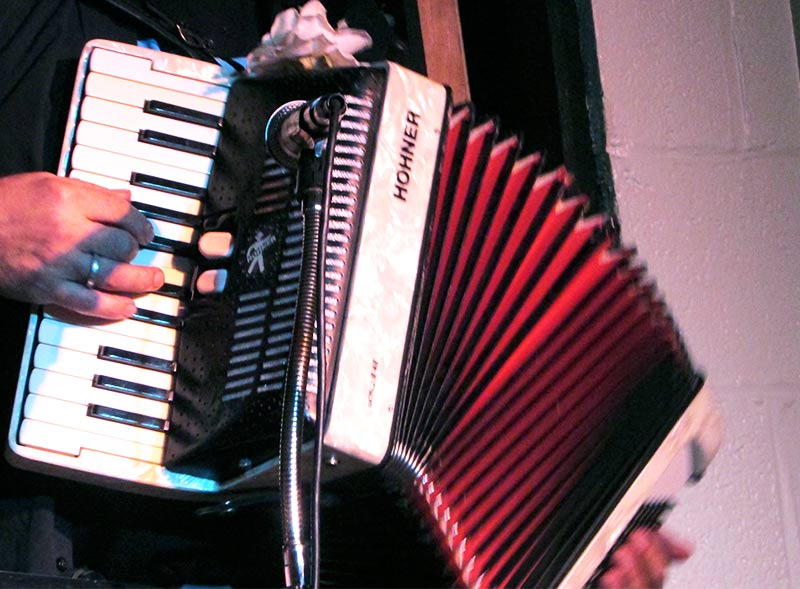 There were loud shouts for an encore, which the duo kindly provided.

The two held up well under super-bright lights that had been blessedly dimmed for the second half of the show. 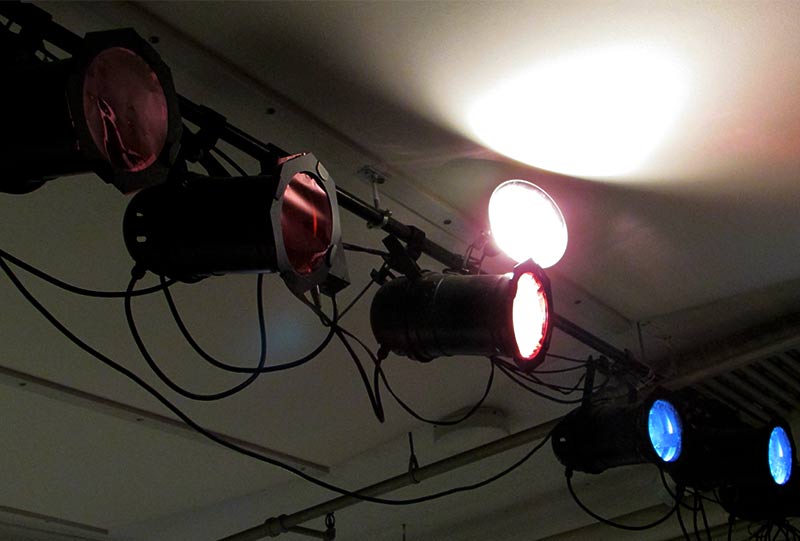 The lighting was run by Moonie’s new friend Jack Black, who let him help press buttons and to whom he had to tell his favorite gorilla joke in return.

(Moonie: “When do gorillas fall from the sky?”
Jack Black: “When?”
Moonie: “During Ape-ril showers!”
Jack Black: “Er, kid, I got a lot of lighting to do here…”)

With one final, ringing note, even the encore had to end, and my MDB-and-Jux-lovin’ nude dude turned a little sad.

But Moonie cheered up by making friends with a little polar bear to whom he could tell another bear joke.

Moonie was so in love with all the color and vibrancy of the Waterfall Arts Center, I had to coax him away. He was trying to make a little nest inside some paint brushes so he could “have art every day.”

Better luck next time, Moonie. I’m sure they’ll have us back at Waterfall Arts Center someday, with or without your jokes.