Our new friend Sarah invited me and Moonie to crash on her couch after the MDB and Juxo show so we wouldn’t have to drive home in the middle of the night. The cabin she and her friends were staying in was in Liberty, Maine, which according to this bumper sticker Moonie found on the piano is “just south of Freedom and a bit beyond Hope.”

Our couch was nicely warmed up by Sarah’s dog Bowie, who was named for his two different-colored eyes and was a sweetheart. Bowie sure thought it was a comfy couch.

We went to bed late, and it would have been nice to sleep more than a couple hours, but Moonie was jumping up and down on me at 6 a.m. squealing over the sky, which was just beginning to lighten in one corner. He loves sunrises, especially when they contain his favorite color, pink. So I reluctantly climbed off the couch, donned a jacket, and went outside with him to watch dawn slowly break over Lake St. George. 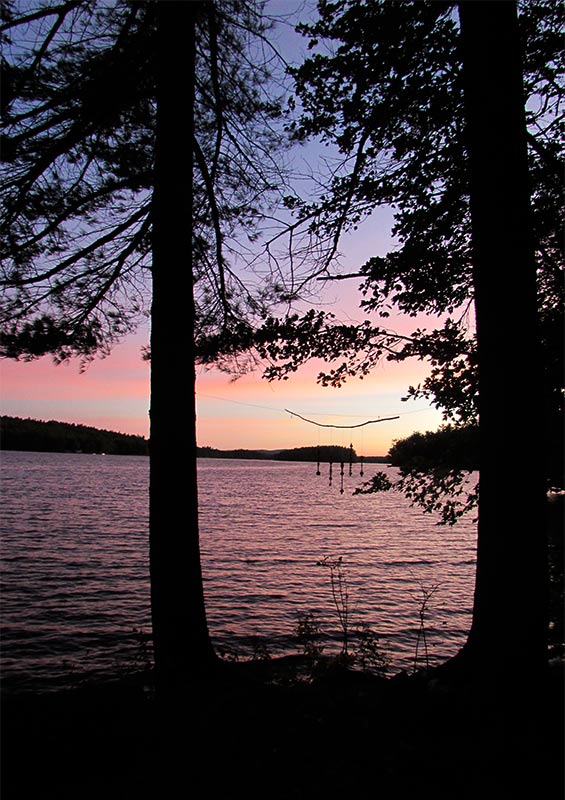 I have to admit it was a pretty great view. 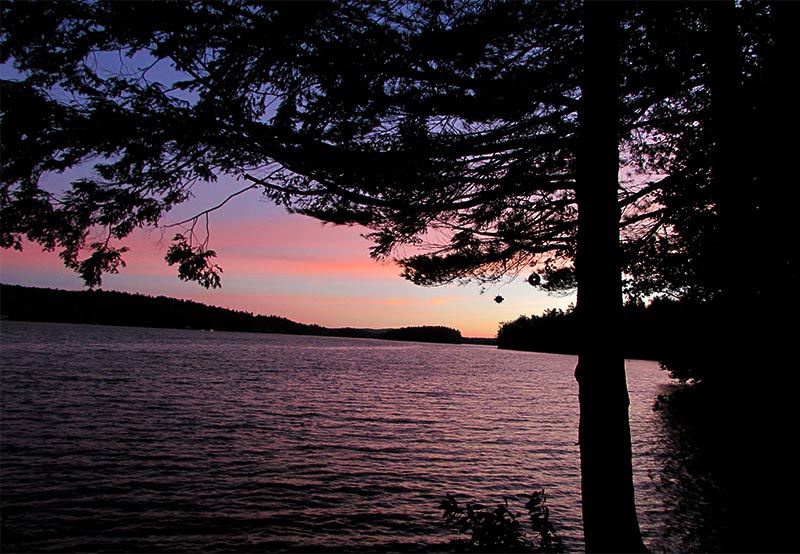 We were wide awake but everyone else was asleep, so Moonie and I decided to take a little walk – which ended up taking hours. We both love the moon, so when we spotted it still in the sky, getting ready to set beyond some trees, we followed it. 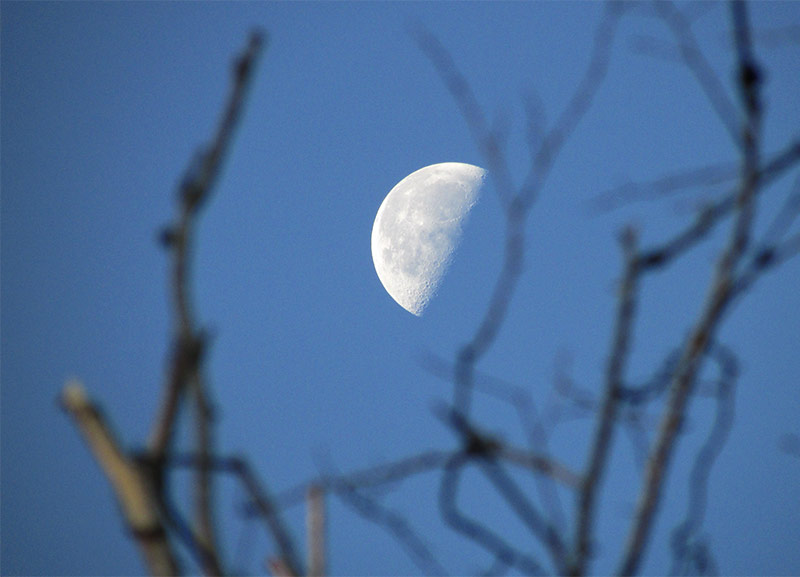 We then walked to a little beach on the lake to stick our legs out and enjoy the emerging water view. (Moonie’s teeny toes were lost amid my comparatively gigantic shoes.)

We found some sea foam washing up on the shore.

And Moonie found a little apple there, too.

He soon found another Moonie-sized apple on the ground. It’s definitely fall in New England.

The trees surrounding our little beach looked lovely as the sun’s early rays bathed them in golden light.

And this dock looked inviting, too.

It’s still a bit early for full-on leaf peeping, but some of the leaves had already turned pretty shades of red and orange.

Even poison ivy looks pretty in the fall. 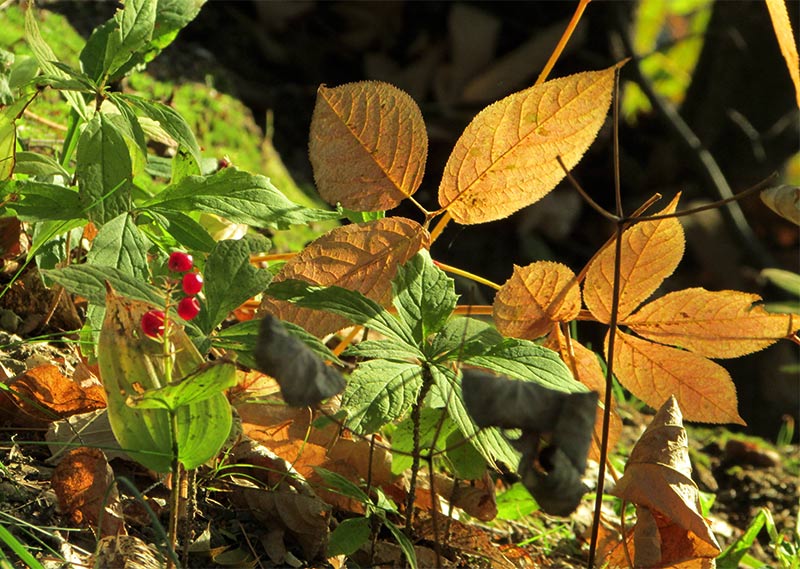 We found a stairway to magical shimmering fairy dust (according to Moonie).

And some magical mushrooms that he claimed were in need of hugs. 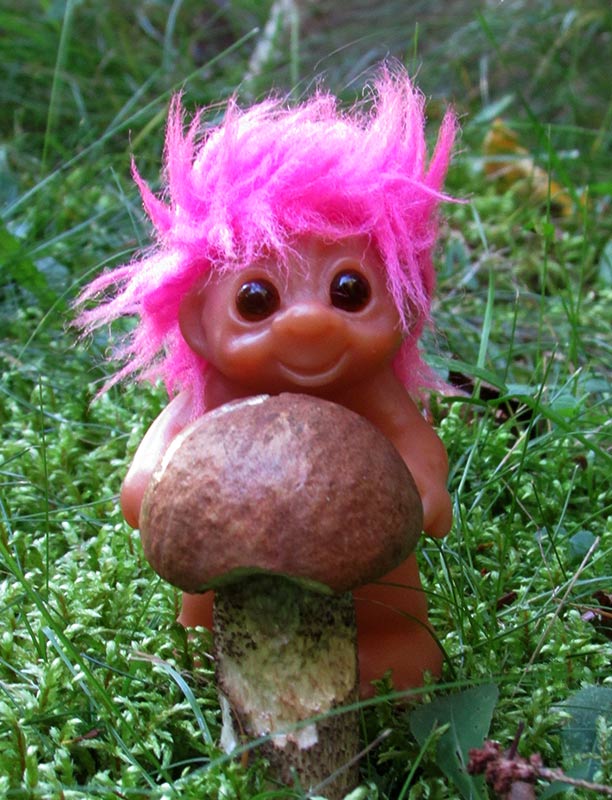 He begged me to photograph these pretty little purple flowers.

At this point we were walking up and down all kinds of private roads, some sporting “no trespassing” signs that said we needed written permission to be there. Oddly, the homes with the least friendly signs were the most abandoned, with no signs of cars or people. If Moonie and I had a cabin on this gorgeous lake, we’d be there every chance we could get, but in some cases, there were just a few signs that people had ever been there, like this:

Although we didn’t cross any peoples’ paths in our long walk, we did spot a lot of birds out foraging for those fabled early-morning worms. 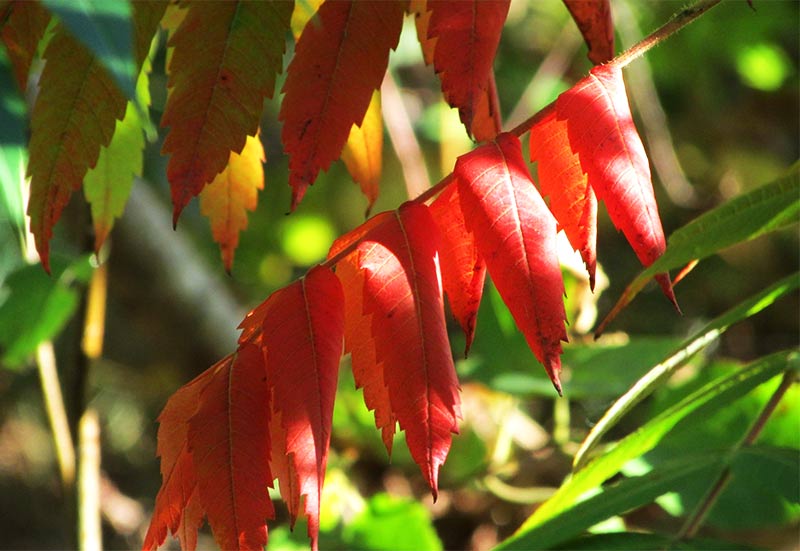 Moonie insisted this was “the world’s most perfect fern,” although I’m not clear on his criteria for fern perfection. I’ve learned to just roll with his declarations, because he can find something positive or superlative about pretty much anything.

He was also excited about this “Moonie-sized” waterfall we found. Lots of rock walls were dripping dreamily with itty-bitty streams of fresh, clear water.

Moonie insisted on posing with his shadow, which the morning sun made look “extra tall.”

And he was quite taken with the cool shadows that leaves were casting on each other. 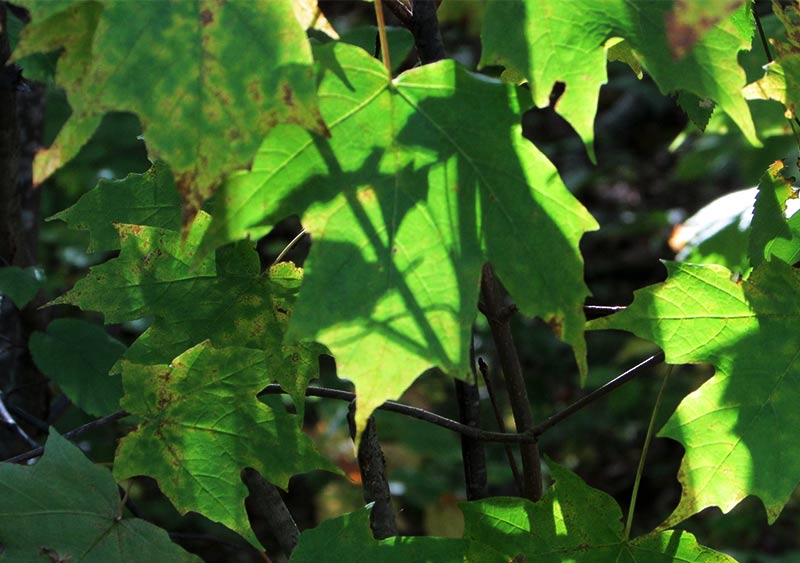 On our way back, we spotted this poster. Moonie and I had taken that photo of the moon at an MDB show in Westerly over the summer, and he squealed in recognition (but quietly, as people were still sleeping).

Back at the cabin, which still lacked signs of life, we crept to the dock. Jux had told us that the cabin belongs to Rob Nelson, a local musician who we’d seen jam with the late Dennis McCarthy and with our pal Dickie Reed. There were little signs all over the cabin that a music lover lived there, but this sculpture hanging by the water was our favorite.

As Moonie and I stood on the dock enjoying the breeze, we listened to loons calling in the distance (something we don’t hear every day). Suddenly a bald eagle flew across us, then decided to show off and swoop past us twice more. It was gorgeous! It landed in a tree across the water. If you look closely, it’s in the center of the photo. 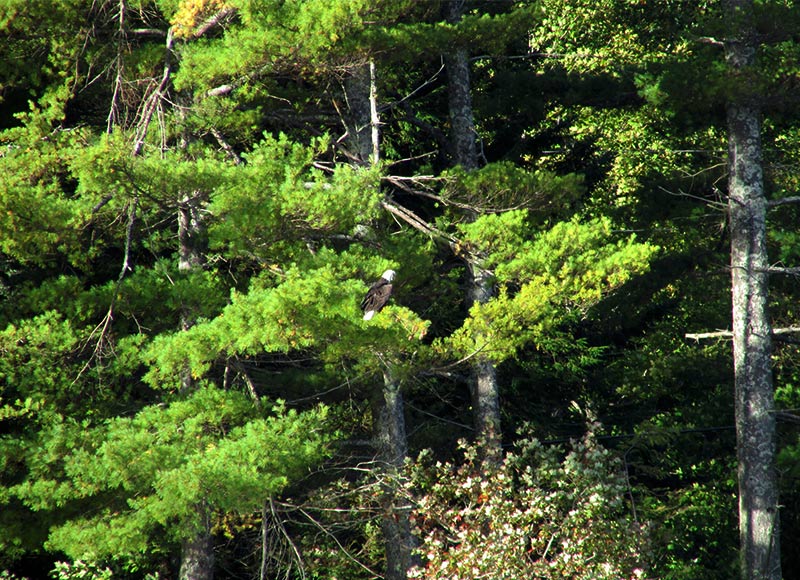 By this time Jux and his sweet wife Ginny were up and packing to head back to Rhode Island for a charity show, so Moonie and I decided to sneak out with them. But first, we took one last look around the cozy cabin and its hurricane lamps.

And we needed one last look out the window, past the Moonie-sized sailboat someone had constructed in a vintage Listerine bottle, for a final glimpse of water and foliage.

Lake St. George, you sure do make for a magical morning.