New Urban Arts is an awesome program in Providence where artists mentor city youth, encouraging them as emerging artists in a safe spot and even helping with homework. But today NUA was a hive of mostly grown-ups as hordes of volunteers, activists, individuals and families attended NUA’s open studios for Pronk! preparations. Those crowds included, of course, our own Moonie. 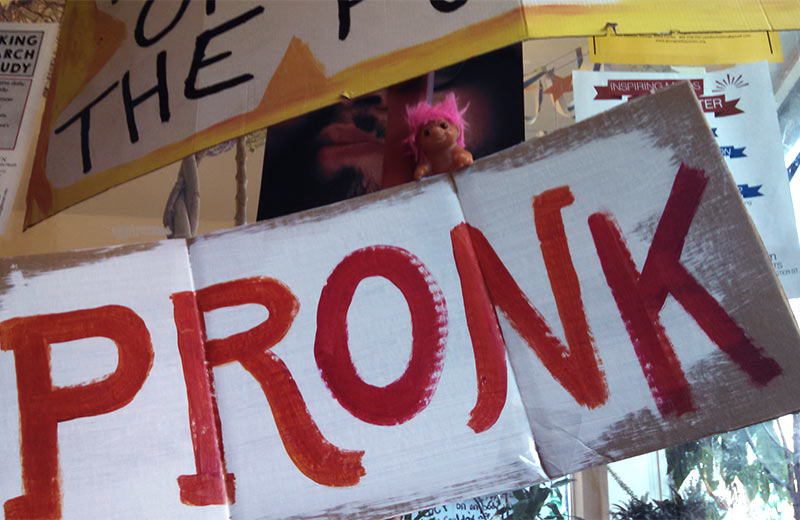 His new friend Beth from NUA took Moonie aside and gave him two choices. He could make himself something fun to wear at Pronk! – a costume, a crown, a sign, a mask, a cape, whatever he wanted – OR he could help the other volunteers make something for Pronk! for the greater good.

I could see him thinking hard. He so loves the idea of dressing up in a funky little costume to celebrate a festival he’s looked forward to for weeks. But he likes helping people even more, so he chose the second option.

Not that he didn’t have a little fun poking around New Urban Arts’ giant studio while Beth and I gathered materials in the basement. He found all kinds of artwork to hug. 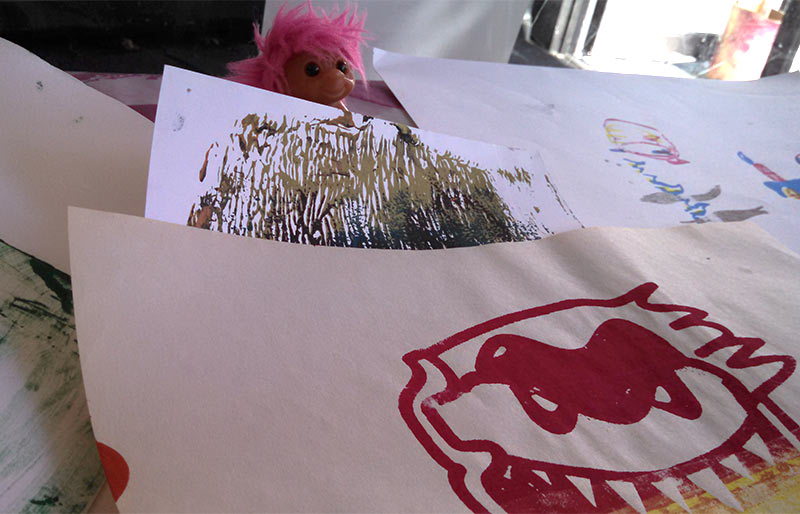 And he seemed to have gotten a bit stuck while exploring the loom. 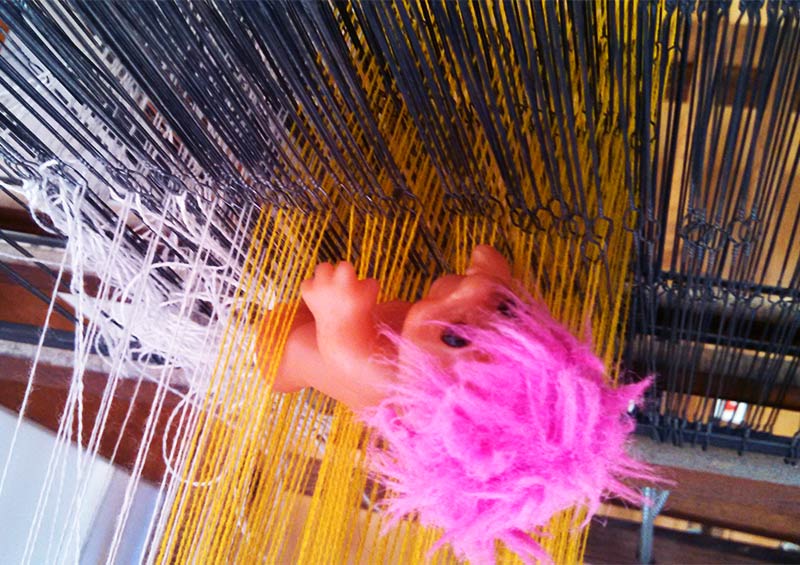 And he had a great time watching some kids and parents make funky little houses. 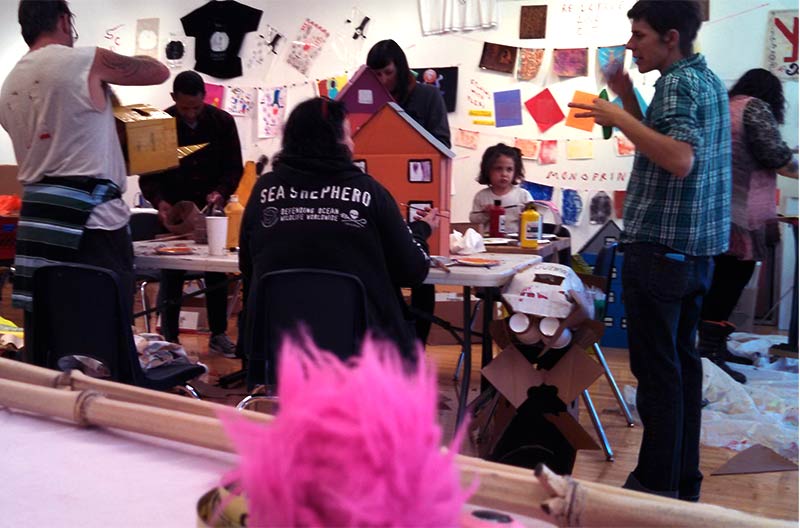 But Moonie got a big responsibility from Beth: make a BIG banner (pink! His favorite color!) that would read, “WE STAND WITH PLANNED PARENTHOOD.” He looked admiringly at the pale pink background and jumped right into cutting out the letters in colors that would pop. (He thought his backwards “N” gave it a good “homemade” look.) And he got to work with Vida, the pretty lady he’d met before at Fort Foreclosure. Vida helped Moonie figure out how the banner would withstand the wind, collecting bamboo beams that would support it when carried in the parade on Monday. 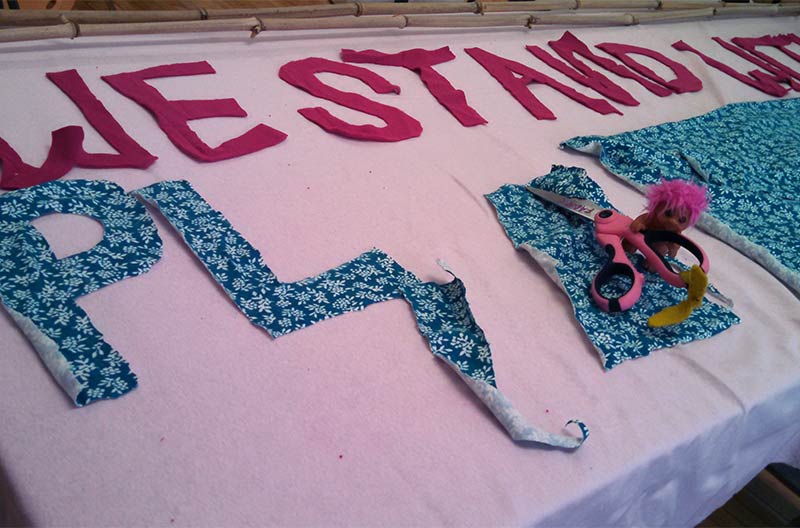 Oh boy! Even the scissors were pink! 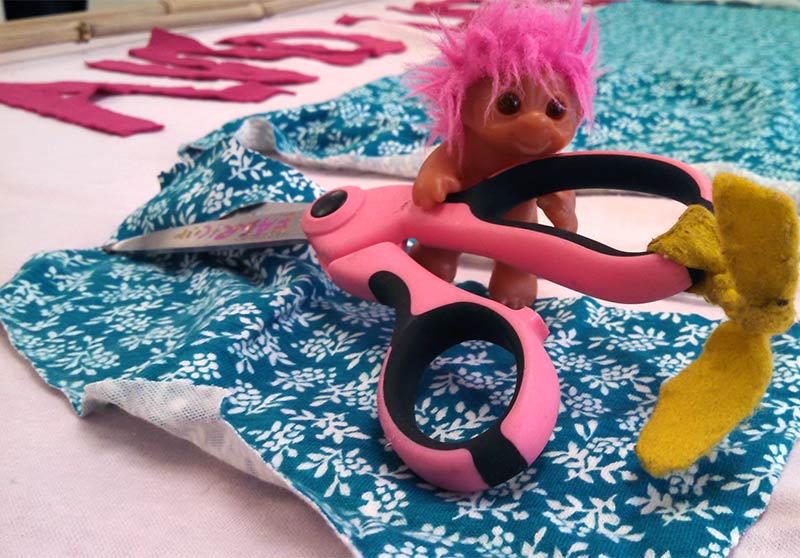 The hours flew by, and before we knew it, it was nearly 5:00 and time to pack up. Moonie stood and beamed at the banner he’d made — even though he only got it to say WE STAND WITH PLANNED. (He liked that what he’d made rhymed.) The studio will be open again all afternoon tomorrow, and someone will finish the word PARENTHOOD and hot-glue it all together. But Moonie can be happy that he got a lot of it started! 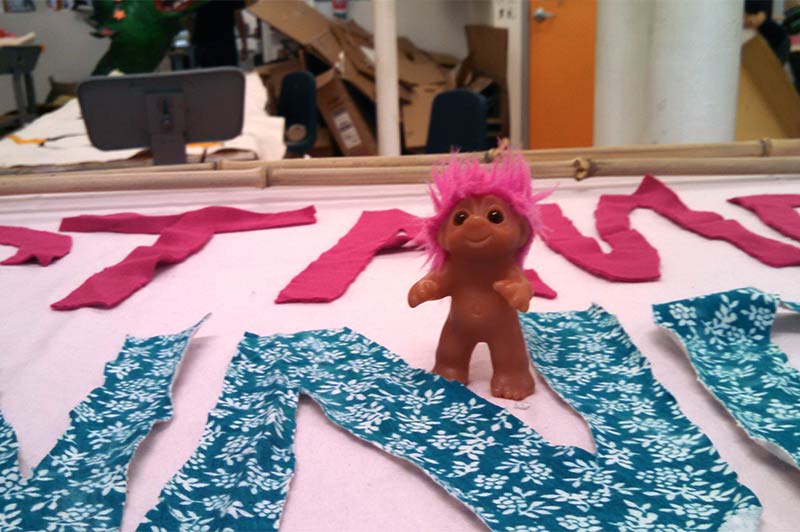 “I like my pink banner!” he said as we left.

“You did a good job,” I said, “But I’m sorry you never got to make your Pronk! costume.”

“Oh, don’t worry about that, I have an idea,” he said. And that little glint I know so well came into his amber eye.

My nude little dude is plotting something. Stay tuned.