You’d think his tummy would have been full from all that soda, but Moonie wanted to head right down the street to try Pizza J, which has only been open a couple of weeks but which everyone has told us is wonderful. How could you go wrong from the folks who brought us Julian’s Restaurant?

My rainbow-loving companion was immediately attracted to Pizza J’s windows.

And to their cool light display on the outside of the building. 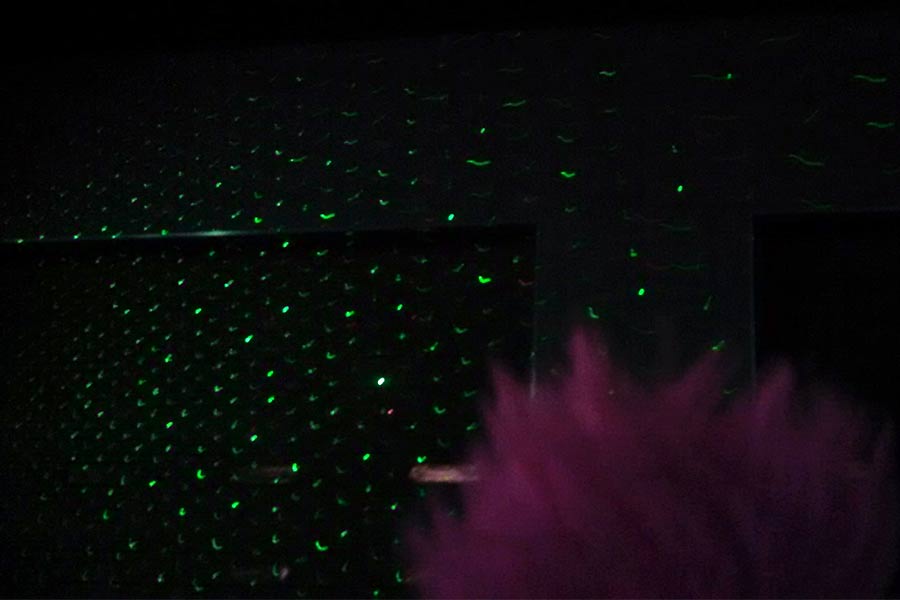 And to this silly sign inside, which had my joke lover giggling maniacally.

Even early on a Wednesday evening, there were parties of diners scattered around the room, with a few folks at the bar. Just as at Providence Pizza Company, although our Lord of the Pies coupons said “Dine-In Only,” we were given the option to take our slice to go – but Moonie loves restaurants, so we opted to dine in. The host brought us to a section with a couple of empty tables and let me and Moonie choose whichever made us more comfortable. Moonie, who loves company, decided we should sit between three biker dudes and a family with two young boys. The crowd was certainly diverse! He also loved that there were four big TVs around the room, and I loved that not one of them was tuned to sports (a rarity).

Moonie giggled his way through some kind of Weird Al Yankovic spoof on Indiana Jones while we were served a fresh carafe of water.

The pizza options sounded delicious, and since we couldn’t decide on only one slice, Moonie and I knocked our heads together and chose two kinds that sounded good, more than happy to pay for the second one. Unfortunately, the Tony Clifton (a white pizza with herbed ricotta, sliced potatoes, olive oil, roasted red pepper, onion, and elephant garlic), which sounded amazing, didn’t happen to be sliced up at the moment. Pizza J typically sells their pizzas whole, not by the slice, so although they are accommodating Lord of the Pies customers with free slices, not every type of pizza is available at every single moment. But they have five other great types besides the Tony Clifton, and after whispering a bit Moonie and I went traditional with the American Beauty (red sauce, cheese, and herbs – but the cheese had more distinct flavor than the usual mozzarella. Moonie and I think maybe it was aged, or whole milk, or mixed with other cheeses like asiago, or maybe a combination of these things).

At any rate, it had been fun seeing our American Beauty heated up in a flaming pizza oven, and it came out perfectly crisp (Moonie will eat anything, of course, but soggy pizza makes him sad). We enjoyed our crisp American Beauty very much! 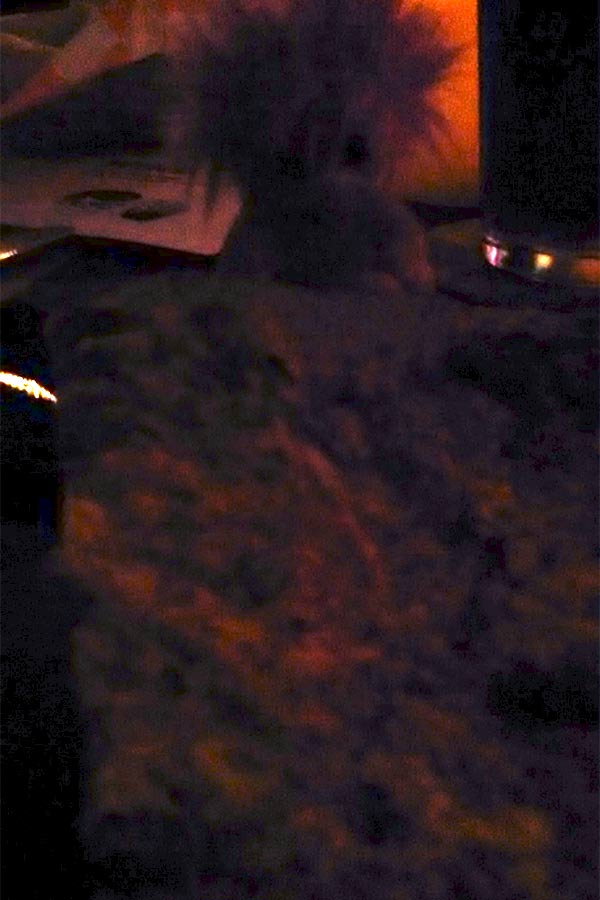 Even after he’d eaten half the slice, Moonie’s little tummy growled, so I ordered him some french fries. According to my little gourmand, they turned out to be perfectly seasoned with generous, but not overwhelming, amounts of salt and pepper. 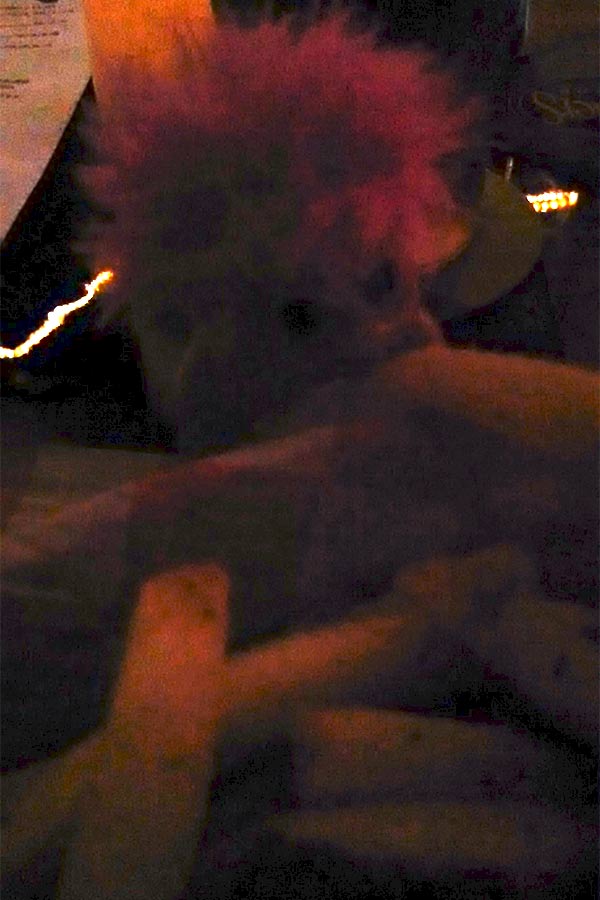 Pizza and fries go well with beer, so I had ordered us a Rocky Point Red ale from local crafters Revival Brewing. I don’t know why I haven’t learned yet, though, because I barely got three sips before my rude little dude helped himself to most of the pint.

I have to admit, though, he gets the cutest little hiccups from beer.

Our adorable server Tony had been incredibly solicitous during our whole visit, even if we were only spending about ten bucks. A lovely young lady had delivered our pizza and asked if we wanted any parmesan cheese or red pepper flakes, and just seconds after she walked away Tony was at our side to ask the same question, making sure we had everything we needed. The host and another employee also did several walk-throughs while we were there, making sure the ever-growing occupants of the dining room were doing well.

When we got up to leave, Moonie suddenly held up his little arms, shouted “Whee!”, and ran towards the back of the restaurant. I thought he’d gotten a bit tipsy from the beer and was going on a mini rampage, but it turned out Pizza J harbors a little alcove out back with a couple of games, and my guy was ready to play.

Moonie enjoyed the pinball for its flashing lights and motion.

He wasn’t so great at the vintage arcade games but had a good time making friends with the little ghosts from Pac-Man. 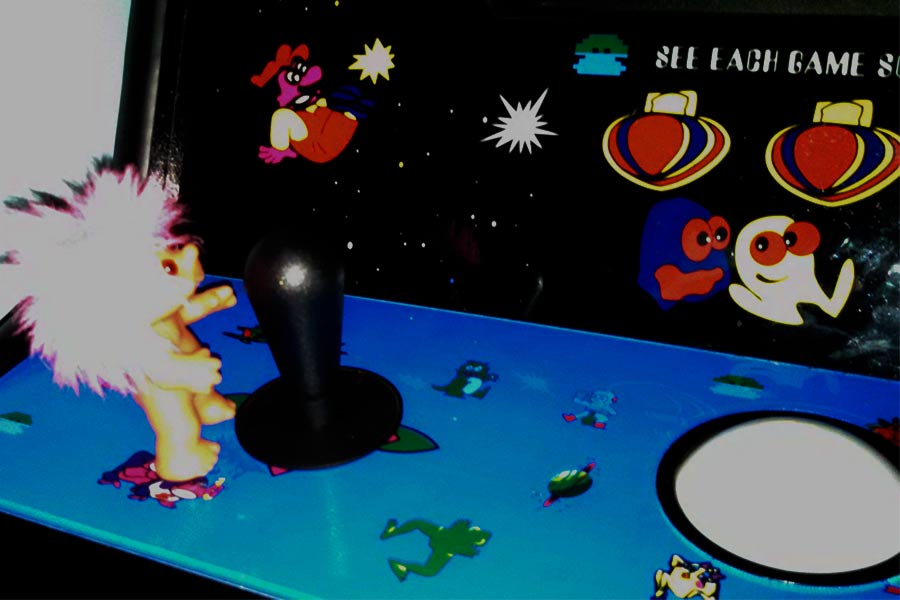 When I finally dragged him away, he paused at this mural on the door to the kitchen, reading aloud, “Stay hungry.”

Uh-oh, I think he took that sign to heart. His little tummy was already starting to grumble again. I got him out of there before he started asking for a repeat of the dinner we’d just consumed. But we have plans to come back, next time with friends, and order a whole entire Tony Clifton. Maybe he’ll even let the rest of us have some.