Moonie’s next Lord of the Pies stop was Tomato City Pizza in Providence.

He paused outside to admire their logo, which he’s considering getting as a tattoo.

Once inside, he hopped up on the counter, shouting, “This must be the place!” I think on some level he’s convinced that he really is the Lord of the Pies.

Although the coupons said “dine-in only” for all 17 participants, Tomato City clearly wasn’t a dine-in operation. There was one table with four chairs, but it was heaped with paperwork. After choosing what kind of pizza we wanted (buffalo chicken) from among several options, we were given it in a takeout box. Moonie also received a colorful flyer with coupons.

Along with the slice of pizza, Tomato City provided a slice of “party pizza.” I never heard of this before moving to Rhode Island and it’s kind of odd – a square or rectangle of pizza crust and sauce and sometimes, but not always, cheese, and it’s served cold. Moonie has adjusted to Rhode Island food. I think he could adjust to anything. 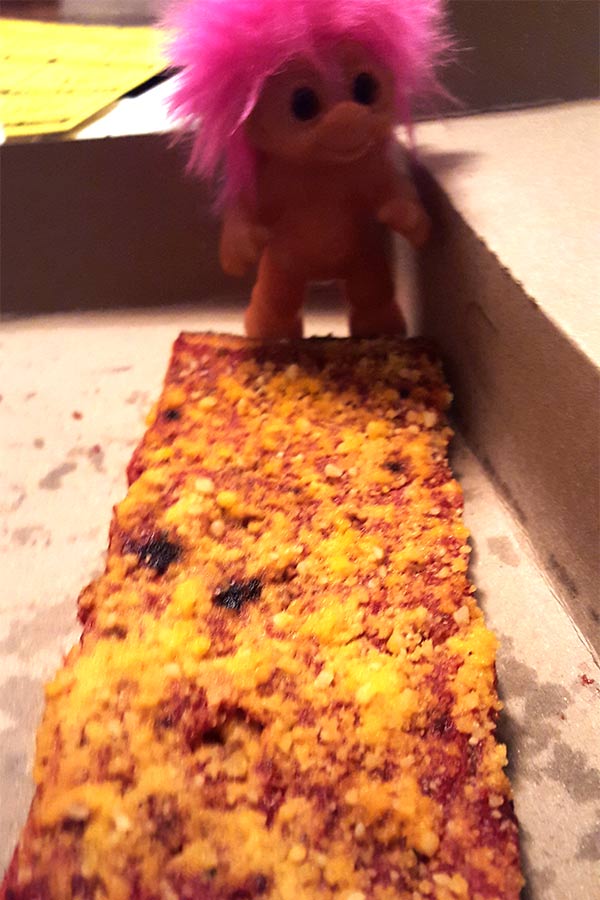 When she was preparing his buffalo chicken slice, the nice lady the counter had asked Moonie if he wanted blue cheese or ranch dressing to go with it. “Both!” he’d shouted. (“Please,” I reminded him.) “Both please!” he corrected himself.

So he had plenty of dipping sauces for his slice.