Oops – Moonie and I had a little trouble trying Andrews Commons. It didn’t occur to us that they’d be closed while Brown University was on Thanksgiving break; they were open only to fill pie orders over the weekend. Then Moonie and I went to the 211 Bowen Street address on the Lord of the Pies coupon and walked around and around trying locked dorm doors until poor Moonie’s lower lip quivered in disappointment. Luckily, the folks behind Rhode Island Food Fights are awesome and put each business’s phone number as well as address on each coupon, so I got ahold of someone to ask. The guy on the phone said they’d be back in business on Monday and also suggested using Cushing Street to find a path leading to the Commons’ main entrance, which is open to the public after 10:00 each morning. So tonight, Moonie and I and Slothy the Sloth and Dan strolled through Brown’s pretty campus and found Andrews Common behind a row of tall windows.

Inside, it was very bright and clean and modern.

There were three choices for pizza, and Moonie went for the barbecue chicken ranch. He’s been on a bit of a chicken pizza kick.

We let Moonie choose where to sit in the long, airy dining hall. He ran over to some upholstered couches, so we followed suit. 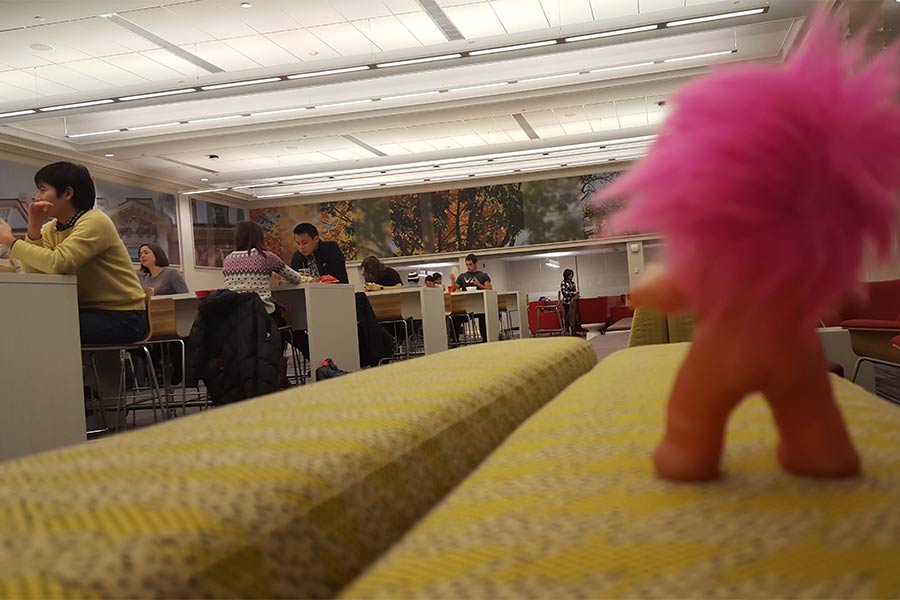 Dan’s caprese pizza didn’t seem like caprese; it didn’t look like it had fresh mozzarella or fresh basil. But he said it was tasty and nicely balanced with the balsamic topping.

And Moonie said his pizza was nicely balanced as well – savory scallions and ranch dressing to offset the sweetness of the barbecue sauce. It was a big slice, nicely crisp without being overly dry, and my little guy made quick work of it.

Next to the pizza station had been a “chili bar” with four types of chili, and Moonie and I had both peeked, thinking that chili sounded good on this cold, almost-December night. But there was only one size and it cost $7.30, which was out of our price range. Maybe in the future we’ll see if Moonie can put on his cutest face and ask if they could maybe sell a Moonie-sized cup to try at a lower price.